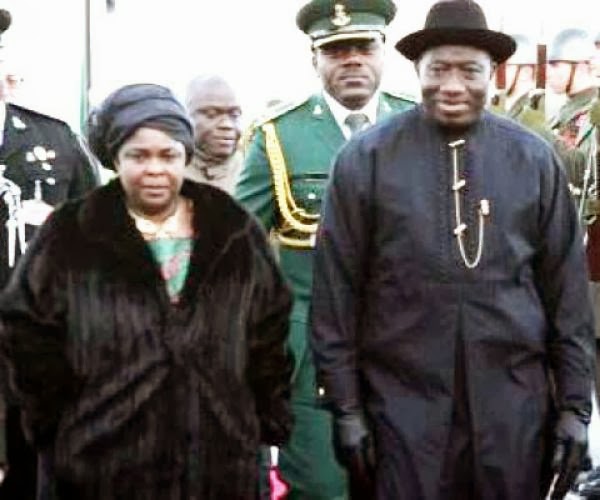 The President of the Federal Republic of Nigeria, Goodluck Ebele Jonathan has left the country with his wife for an important medical treatment in Germany.

Sources disclosed that the President left Abuja on Tuesday morning with his ailing wife Patience Jonathan under tight secrecy.

Although details of the visit were shrouded in secrecy as the president left with only about three of his trusted aides, it was gathered that the First Lady will see her doctors before they leave for France on Friday where the president is expected to attend a security meeting for African leaders.

The president left the Nnamdi Azikiwe airport Tuesday morning at 2am with his ADC, the CSO and two other aides ostensibly to ward off any rumour about the First Lady’s health.

The president’s wife has been out of public glare for a while owing to her deteriorating health.

She was in a German hospital for more than one month earlier this year where she said she died and resurrected.

The initial report on Tuesday was that the President Goodluck Jonathan will leave Abuja tonight {Tuesday} for Germany en-route to Paris, France where he is scheduled to participate in the Summit on Peace and Security in Africa.

About fifty heads of state and government are expected to participate in the Elysee Palace Summit which will be hosted by President Francois Hollande of France.

The United Nations Secretary-General, Mr. Ban Ki Moon, heads of European institutions and leaders of Africa’s sub-regional and continental organizations such as the African Union and ECOWAS will also participate in the summit which has economic partnerships, sustainable development and climate change on its agenda as well.

He will stop-over in Germany for a private visit on his way to Paris and return to Abuja at the conclusion of the summit on Saturday.

But an online media SaharaReporters has it that ”President Goodluck Jonathan and his wife, Patience Jonathan, on Wednesday checked in at a hospital in Germany.

And that plans were made for the president to receive medical attention in Germany after he suddenly fell ill last weekend in his home-state of Bayelsa during a visit there. The president’s sudden illness almost led to his emergency evacuation to Germany, our source said.”