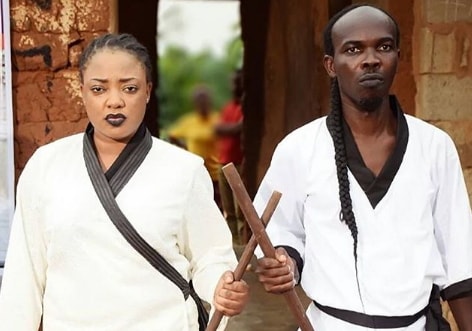 Lately, you have been a comic actor to reckon with in the industry, how did you do it?

As far as comedy is concern, I can categorically tell you that comedy is not something you can just dab into. When you have it, people will know that you really have it. A person like you knows that I am a comedian and that is why you appreciate me. You don’t just jump into what you know you cannot do. This talent is from God, sometimes, I watch myself and I will also ask where did I get all these jokes from, and my answer has always been God. He is the one giving me the inspiration. I also give it to my directors.

You won City People movie award as best comic actor 3 times back to back, what is the secret?

You are right. I have won it thrice. Anytime I receive letter from them that I have been nominated, and I grace the occasion, I do mention it in my interviews that I am not here to win the award but I am here because my job/talent is being appreciated with the nomination. Winning it or not, the message I see there is to go and work hard. So, winning it back to back is the grace of God not man’s power. I didn’t pay them to win the award and we have several comedians out there.

Your comedy skit on Instagram ‘Aboru Boye’ with Ifa Lere, how did you come about it?

Between man and God, the Aboru Boye skit is just an inspiration. If you flash back to about a year ago, there was this skit called Oluwagbemilowosoke. I started it with my idea and I called Omo Adugbo who always disturbs. I shared the idea with him. It is the story of my life. I don’t live a fake life style, so I let people know the truth about my life style. I started the skit and people loved it. When you start a story, there must an end. So, Aboru Boye came when one of Wizkid’s hit singles, ‘Soko’ was released. I gave it a thought that when you say “Kofun Lopolopo, Kofun Lotun, Kofun Losi” it has its own meaning, and I called Olaitan that let us start a skit with Ifa Priest’s style and that was all. Wizkid reposted it and that was how it became a household skit. He reposted it a day before my birthday May 4th, people started tagging me. Even though I haven’t seen Wizkid before, the post he made for me really changed my life. People called me not to relent in doing the skit and I thank God for where we are today.

People said the role of Ifa priest you do play is from experience, how factual is that?

To those of you claiming that the ‘Ifa’ skit I do on Instagram is from experience, first and foremost, I want you to know that we learn every day and you must know it if you still want to remain pertinent in the movie industry. I am an actor cum comedian and when you say something beside me, I grab it immediately. Ibrahim Chatta is there, there is no role he can’t play when it comes to acting and nobody said he has an oracle at home. If it is about an Oracle worshiper, Islamic cleric or the role of a pastor is given to him to play, he will do it perfectly. As an actor, it doesn’t make sense when a role is given to me and I say I can’t play it. All those incantations are not real and I gathered them from different location I have been to. I am not an oracle worshipper, the grace of God is sufficient for me.

What informed your Indian style of acting recently?

What I can say about this is that, when I was much younger, I so much love Indian movies as a teenager. Same with Jack Chan and other Chinese films. I see myself as someone who shouldn’t be in one place. I am a Yoruba actor and I watch other tribe movies to learn something new. As a comedian, that something new might be useful to me on set or when I anchor event as an MC. Sometimes when I go to location, the script at hand will look like the foreign film I just saw, and by the time I make use of the new thing I learnt on set, the director will think I am mad to have grabbed the idea once. I don’t sit in one place expecting miracle to come, I do research a lot and that is why I am moving forward every day.

Which movie would you say really helped your career and how?

The movie that really helped my career even till this moment is titled Jugunu. In every way, it really opened doors for me. Right now, I am preparing to take the ‘Return of Jugunu’ to cinema. I am currently working on that. I have other films I did, such as Ore Kan Were Meta, Muniru ati Ambali and Opa Kan from Sanyeri, they all tried for me.

You are one of the most followed Yoruba actors on Instagram, how do you cope with your female fans?

What I can say about this is that, some years ago, there was nothing like Instagram, it was only Facebook but now Technology has changed so many things. When I started the skit on Instagram, people were of the opinion that I don’t know the next path to follow, what am I looking for on Instagram, I don’t need it. I joined Instagram because that is the new vibe. If you have a million followers, whatever you say, they will believe you because they know it is your page and you can’t tell lies with it. That is just it. My female fans are coping with me. No fight, no quarrel. Anyone who ask me out, I make them understand that wife and kids are at home and they don’t disturb me again, because it is very obvious that I will just use and dump such person.

Now the fame and money has come, how does your wife react to the fact that babes are all over you?

Indeed, there is money and fame. God has really uplifted me because I never thought I will be where I am today. But when I had nothing, my wife didn’t react anyhow, still she was showering prayers on me. Now, that the story has changed, she is still praying for me. She sees me as the same Tayo she knew when there was nothing . She is not reacting anyhow, she is still praying for me because that is where we eat and feed our family. The more the fame, the happier she is.

Tell us what people don’t know about you?

What people really don’t know about me is that I don’t tell lies. Recently, I was paid to anchor an event, on my way to the venue, there was a long traffic, I was force to drop from my car and take a bike, I covered my face with cap and on getting there, they didn’t allow me to do the programme. I made them understand that I am not like that, if I have been paid to anchor a show, I must show up, because the money you have spent, to refund it may be difficult. So, what you don’t know about me is that I am not a lying type. If I lie to you, I am doing that because I want the best for such person. If I say I am coming, just be expecting me. Punctuality is a soul of any business I involve myself.

What should your fans be expecting from you?

My fans should expect the Return of Jugunu at the cinema soon. I just returned from Germany where the movie was shown. By the time we start the promo, please support my career by coming to the cinema to see it. This is the only job I feed my family with.