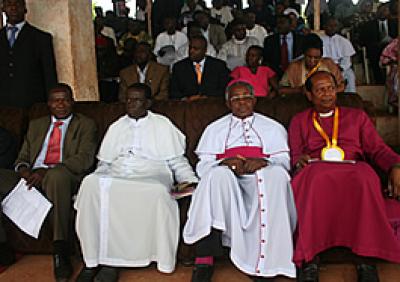 The Kidnappers of a Parish Priest of Onitsha-Enugu Ezike in Igboeze-North, Rev. Fr. Chijioke Amoke, have threatened to kill him if a ransom of N10 million is not paid by the Nsukka Catholic Diocese.

Rev. Fr. Simon Ugwueze, the Coordinator of Justice and Peace Commission in the diocese, on Monday, said the kidnappers called him with Amoke’s mobile phone, demanding N10 million.

“I told them that the church has no money and does not approve payment of ransom. I also made them to understand that Catholic Bishops Conference is against paying even N10 for ransom,” Ugwueze said.

“I urged them to release him because he is a priest working in God’s vineyard to help people achieve salvation. When they discovered that I was not interested in the ransom negotiation they banged the phone.”

Felix Odo, the Nsukka Diocesan Secretary, said the diocese had resorted to individual and group prayers to ensure that the abducted persist was released.

“The church is optimistic that with prayers, God will secure his release. I wonder where the kidnappers expect the church to get N10 million ransom,” he said.

Amoke was kidnapped at the church gate while he was trying to drive into the Parish-House, last Wednesday, by armed gunmen who came in a black jeep.

The Enugu State Commissioner of Police, Danazumi Doma, confirmed the kidnap of the catholic priest but assured that the “police is working round the clock to ensure that the priest is rescued”.

These people are heartless.