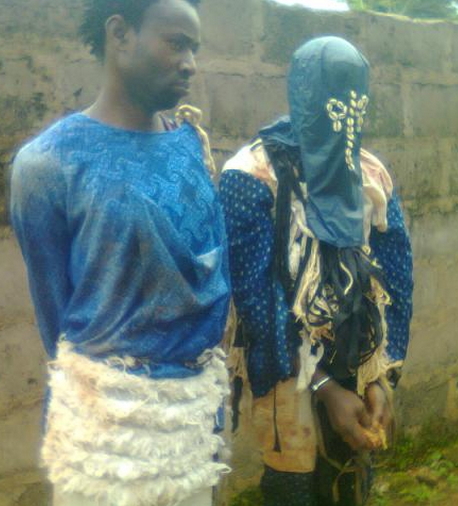 The Police in Nsukka on Saturday arrested two men who wore masquerade costume in Ovoko community in Nsukka LGA for allegedly beating up a passenger on commercial motorcycle and robbing him of N57,000.

The incident happened on the Nsukka /Oballo-Afor highway.

A police source said policemen moved to the scene when the victim, Mr Chinonso Ezewaji, reported the matter to Nsukka Police Area command and the two men were arrested.

“The escorts of the masquerades however ran away.
“There were eight masquerades; they blocked the Nsukka /Obollo-Afor road and harassed people. “The two masquerades arrested however denied collecting the N57,000 from Ezewaji, but claimed they know the person who collected the money from the victim.
“When we searched one of the arrested masquerades, we saw Indian hemp in his pocket,” the police source said.

He urged communities to regulate and monitor those who wear masquerade costume, adding that some of them use the opportunity to harass, intimidate and rob innocent members of the public.

“The Police are not against the people practicing their tradition and culture, but community leaders must know the character of people they allow to wear costume of masquerade in the name of culture.

“A masquerade has no right to mount road block on busy highways where motorists, motorcyclists and other road users move on daily basis.
“The police have commenced investigation and will get to the root of this matter as issues of masquerade disturbing people have become a recurring decimal,’’ Amarizu said.

The victim, Ezewaji, a trader, who deals in clothing materials, told the News Agency of Nigeria (NAN) he was on his way from Nsukka to Obollo-Afor to see his mother, when the masquerades stopped the motorcycle he was riding on.

“They beat me, searched me and collected N57,000.
“When they left, I ran into the bush and when I discovered they have gone some distance, I came out and went to the police to report.

The two men wearing masquerade costume who were arrested, identified themselves as Kenchukwu Eze, a carpenter and Ejiofor Eze, a brick-layer.
They however denied the allegation that they stole money from Ezewaji.

They claimed that their colleague, Chima Mamah stole the money.

Eze, however, admitted that the police saw Indian hemp in his pocket, saying it was the leftover of what they smoked before coming out.
“If the police will release me, I will not wear masquerade costume, nor smoke Indian hemp again,” he pleaded.