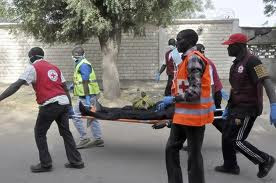 Rev. Ilaisha Kabura, a retired Pastor of COCIN Church in Maiduguri, as he was yesterday morning killed by unidentified gunmen.

According to report from DailyPost, the heavily armed men stormed the cleric’s residence in Maiduguri and shot him dead in the presence of his family members as they were preparing to go to church.

Eyewitness account said that he saw the two gunmen in front of the Reverend’s family house before they fired several shots at him and she took to their heels.

According to him, when he saw the gunmen, he had thought that they came visiting, until he started hearing gun shots some minutes later which led to the pastor’s demise.

Jubrin said no arrest has been made yet but he assured that his men were working round the clock to bring the killers to book.(Source: DailyPost)

SPAMMERS ALERT:
Beware of spammers posting offers in the comment section of this blog, we are in no way endorsing their offers.