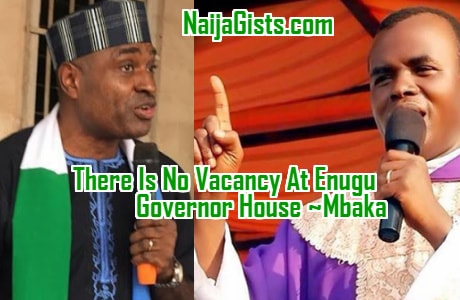 The Director of Adoration Ministry Enugu Nigeria (AMEN), Rev. Ejike Mbaka, on said said there is no vacancy in the Enugu State Government House in 2019.

The cleric said Ugwuanyi had judiciously managed the state’s lean resources for the benefit of the people.

The Catholic priest also described Ugwuanyi as “the best governor so far in Enugu State”, adding that he is “an epitome of peace, a sanctuary of conflict resolution and model for rural and urban development”.

Rev. Mbaka spoke at the Adoration Arena in Enugu during the thanksgiving mass for the governor’s recent victory at the Supreme Court.

He thanked God for giving the state such an outstanding leader, saying it was the first time since he became a priest that the state was experiencing peace.

“I pray to God that this good man with intimidating humility will continue to govern Enugu State till 2023.

“Our governor, God has opened door for you; no man can close it. Those who are following him should continue to follow him. He is a good man. We have one candidate for the governorship seat in 2019 in Enugu State in the name of Gburugburu (Ugwuanyi). We are begging him to come and complete the good works he has started in Enugu State. Enugu State is behind him. The church, students, teachers, traditional rulers, Adoration Ministry, many others are also behind him.

“I, therefore, advise those who want to contest against him to please consider other elective positions.”