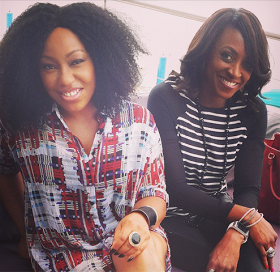 Yesterday the blogsphere was saturated with the breaking news that Nollywood actress Rita Dominic hit a studio to record new music with Kate Henshaw.

The false news has reached the hearing of the star actresses who debunked the story on Twitter one hour ago.

It is really a WA!!”@ritaUdominic: Getting tweets and calls about recording a song with @HenshawKate hmmmm…. It is a wa!” – Kate said in a tweet

At a loss.How did this tweet turn into we are in a studio singing? RT @HenshawKate With @ritaudominic at a recording. Stay tuned. . *wink* – said Rita Dominic

Here is a fan`s response

@ritaUdominic @HenshawKate Blame it on Nigerian bloggers. They’d find any means to twist everything and turn it to NEWS.