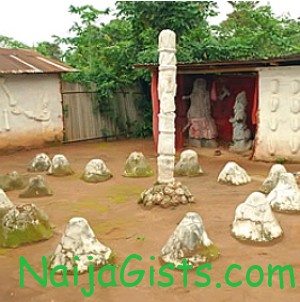 According to leadership newspaper, some suspected ritualists who are currently in operation in Eruemukowharien community, Ughelli north LGA of Delta State, Nigeria have allegedly murdered a popular monarch (Chief Francis) in the area. naijagists.com

The ritualists removed his genitals and intestine, even as his body was deposited by a river bank. The victim, identified as Francis (surname withheld), had reportedly left a town hall meeting on Thursday night when the ritualists attacked him.

An eyewitness, who spoke under the condition of anonymity, said he was shot and dragged into the bush, where they removed his vital organs before dumping him by the river bank. LEADERSHIP WEEKEND gathered that the ritualists had also shot sporadically into the air to scare passers-by before attacking the victims.

Sources said cases relating to ritual killings have been rampant within Ibusa and Ogwashi-Uku communities in the last few months, as not less than thirteen prominent persons have been reportedly killed with vital parts of their bodies removed.

Some residents, who spoke to LEADERSHIP WEEKEND on anonymity, said it was a case of unknown gun men, but family members of the deceased insists that vital parts of his body were removed, which is a strong indication of ritual killing. LEADERSHIP WEEKEND further investigations revealed that there have been recurrent cases of bizarre murder in the state.

Last week Tuesday, a female JSS 2 student was reportedly murdered in Okwenear Asaba with her pubic hair shaved off and her ears removed by suspected ritualists. Police spokesman in the state, DSP Charles Muka, who confirmed the story, said some persons were arrested, adding that the murdered chief was a case of ritual. (Credit: Leadership News)