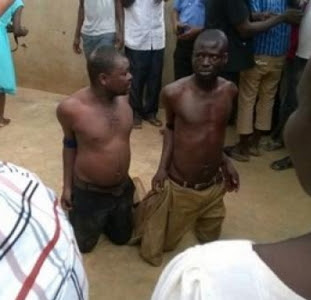 The suspect simply identified as Ekene was caught in Ejigbo area of Lagos with a suspicious sack yesterday. During investigation, he told the police that the sack contained pounded baby flesh.

He further confessed that a popular Oil and Gas billionaire (name withheld by request) ordered him to take it to a native doctor for ritual purpose.

Ekene said the oil billionaire promised him N500,000 for the operation which he carried out successfully.

The oil magnate, the herbalist and the suspected ritual killer have been arrested.

The case is still dragging because the oil magnate has denied knowing the herbalist and the ritual killer.

The three have been detailed at SARS office in Ikeja where they are being interrogated.