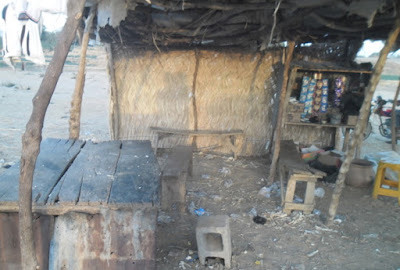 Where body was discovered

A 43-year-old mentally challenged man identified as Magaji Auwalu was over the weekend beheaded by suspected ritualists at a Mai shayi (makeshift) joint in Kano.

According to a night guard working in the area, Haladu Gundutse Mohammed, the headless body of Auwalu was found around 6am as tea sellers and other workers resumed business.

He said shortly after the discovery, Kura Local Government officials rushed to the scene, with a Toyota Hilux, met the headless body, which was still dripping, with blood and conveyed the remains to the Aminu Kano Teaching Hospital, where it was deposited at the mortuary.

Also, he said, the Police at the Kura Division have since commenced investigation to unravel the mystery behind the murder, whose head could not be found, suggesting that his assailants must have escaped, with the head for ritual purposes.

Furthermore, according to our source, the assailants dragged the headless body of the insane man to a river bank, within the vicinity, from where tippers load sand and dumped his body, without the head.

The relatives of the deceased have come forward to claim his corpse following a local radio announcement.