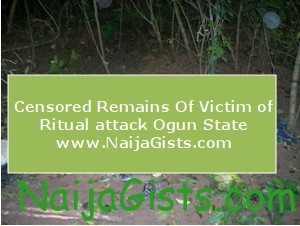 Miss Tonia Ibelefa, a 25 year old lady was attacked by a group of ritualists around Lagos-Sagamu expressway in Ogun State, Nigeria. naijagists.com

2 weeks after her kidnap, her body was found at the same spot where she was kidnapped. It was discovered that her vital parts had been removed which includes her breast, clitoris,and tongue.

A week ago, the same incident happened at the same spot.

We learnt the late Tonia was traveling with two other male relations when she was kidnapped.

According to an eye witness, the ritualists armed with all sorts of weapons pulled the lady out of the car and dragged her into the bush and the two other occupants were seriously checked by the ritualists who put gun on their heads.

“She is the one we want and you must surrender her,” the ritualists told the two men, according to the witness.

According to affirmation from the eye witness, the matter was immediately reported to the police.

Few hours later, Tonia’s parent got a call from a stranger who told them to pick their daughter’s corpse from a point close to the kidnap spot.

The deceased’s elder sister said Tonia’s body was still very fresh when she was picked up.

She asserted that it was possible she wasn’t killed right after her kidnap.

As at the time of this report, police are still working on unraveling mystery surrounding Tonia’s murder.