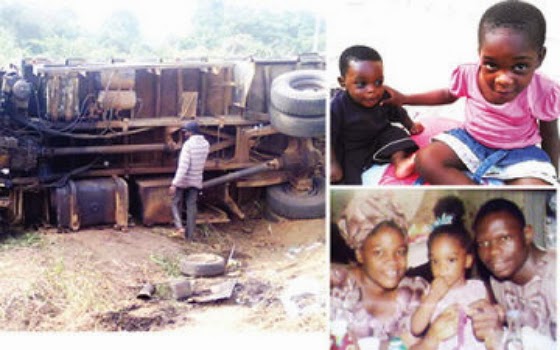 A family of 4 has perished in an avoidable car accident reportedly caused by police road block on the popular Iwo-Ibadan Expressway in Osun State.

According to eye witnesses, a couple and their 2 children were crushed to death by a truck carrying bags of rice on Christmas Eve.

A witness who was in a commercial bus at the time of the incident said Mr and Mrs Olumide Bankole and their children Sharon and Shama were crushed to death by a truck which lost control while trying to avoid running into a queue of vehicles on the road due to a police roadblock.

The eyewitness, who identified himself as Leke Okunola, said rescuers at the scene learnt that the family was traveling from Ogbomoso in Oyo State to Ibadan when the accident occurred around Odo Oba River on Christmas Eve. He said the car in which the Bankoles were travelling was coming from Iwo and heading towards Ibadan, while the truck was coming from Ibadan.

He blamed the accident on police who put checkpoint in place in order to collect bribe from motorists.

Leke Okunola said if the road block was not there, the accident would not have happened.

May the departed souls rest in peace.