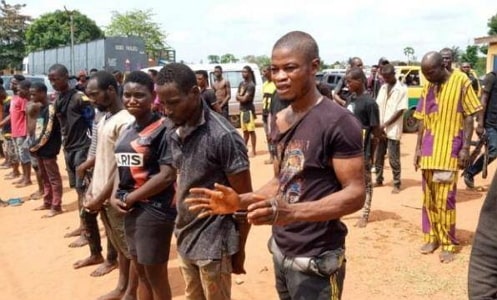 Those living in areas affected by frequent robbery attacks in Ogun and Lagos state have taken to the social media to lament their ordeals.

According to residents, peace is yet to return to their estates since the beginning of the lockdown and it seems the situation is getting worse each passing day.

A resident, Deborah Reiyewa took to the social medial to narrate how some hoodlums robbed in her neighbourhood for over an hour and the police did not respond until people started talking about it on the social media.

Another user @iamMotola lamented how the community vigilante in his estate at Ogun State caught a suspect and called the police but were told that the cell was full.

Here is what the user wrote on the social media:

“Caught one in our Estate this evening (Saturday) and the other one escaped.

“We called the police and they said cell is full. This is disheartening, we’re not safe! I wasn’t planning on making a thread about this post before but I feel like I should to make it crystal clear to some.

“Firstly, it started as a cult fight here in lfo before the whole thing escalated to stealing, raping and killings since then we’ve been on guard in my area since last Tuesday 12am to 4am every day.

“We’d burn at least three tires every night that we already ran out of something to burn at the time of this tweet.

“After resting in the afternoon, I decided to take a stroll in my estate for no particular reason. Then, I noticed a strange face in the vicinity, very dirty and wet like he had fallen into water or probably escaped from somewhere.

“I moved closer to him and ask who he was and why he was here? He paid little to no attention to me at first hoping I’ll think he lives in the estate.

“When he got that I wasn’t buying the drama he said he was looking for five N500 and that he was from Seriki (another village in lfo) and that he left home to buy body cream and somehow landed in our area to play Bet9ja.

“Please know that Seriki to my area is nothing less than N300 transport. I knew he was lying.

“I grabbed him by the waist and gave him a blow in his jaw as a first attack because I don’t know if he had a weapon or something. I called the estate security immediately.

“This boy (21) had already robbed a Bet9ja shop outside the estate and got lost, not knowing where to turn to.

“Residents started to hit him and he confessed he came from Iju Ishaga.

“We called the police station and they said the whole place is full already. We didn’t lynch this guy one bit.

“These boys are not hungry, they’re evil just evil. These boys rape and kill housewives, they move in groups but send a spy first.”

A similar drama happened in Agege Lagos  where residents attacked some suspected robbers when no police showed up to rescue them.