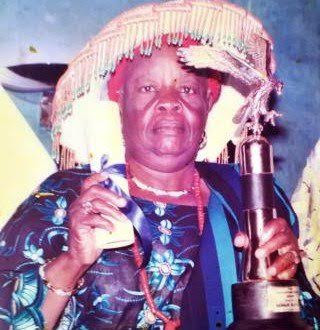 A very influential woman in Ijebu Ode Ogun State has been murdered.

The woman in question is Alhaja Sadia Elewuju, an 82-year-old disciplinarian installed as Iyaloja few years ago by Oba Sikiru Kayode Adetona, the Awujale of Ijebu Ode.

According to sources, the octogenarian was macheted recklessly yesterday at her bungalow around 3pm.

She died while she was being rushed to the hospital.

The deceased before her death was a very fearless and outspoken woman who stood her ground on many matter. “She is always very vocal and fierce in her position on any matter. She has championed many causes for women especially the market women.