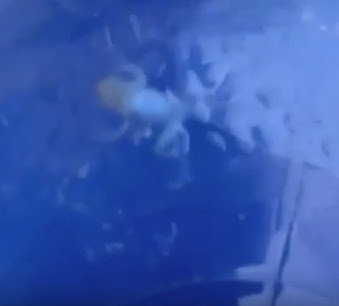 Recently a friend of mine found a frog in his Unsealed Bottle of Cway Dispenser water, (see attached video), He has since reported the matter to Cway and was ignored until he posted videos online, some staff of Cway came to his house, apologised for the mishap and pleaded with him to take down the video, they then promised him free bottles of CWAY water and a free dispenser.

He refused, asking them to recall the entire batch so as not to poison people from drinking contaminated water, Cway has since gone ahead to discredit the man’s claims online and Ignore him.

We are thus calling on you to please share video on your blog as we call on CWAY to take responsibility for their actions as well as other Nigerians who have the same issues with other agencies to speak up rather than cover up for them.

Please note that the tap from which the water is packaged will not fit a frog, so the said bottle must have been filled wrongly.

CWAY gives franchises to water bottling companies to package water in its name for sales, there is no proper monitoring of this franchise. There is no telling how many people have suffered complications from drinking contaminated water.

Continue Reading
You may also like...
Related Topics:cway, dead, frog