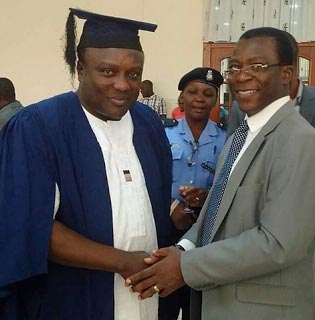 Although he’s one of Fuji’s most successful practitioners, Saheed Osupa thinks it’s important for everyone to have both formal and informal education.

He was speaking during a chat at NET TV where he made a stop as he gears up for the Ariya Repete concert in Lagos today. While recounting his three-decade-long career, he stated that musically he feels accomplished but is now back in school to make everything complete.

‘There’s nothing like being educated, both formally and informally. I have informal education and lots of native intelligence. That’s why I’m back in school to make up for lost time. I’ve been so busy with my career that I haven’t had time to study as I’ve wanted. But right now, I’m in 300 level at the University of Ibadan where I’m studying Political Science’, he said.

Saheed Osupa is one of the artistes billed to perform at the semifinal concert of Ariya Repete 2018. He will be joined at other bigwigs such as Adewale Ayuba, Sir Shina Peters, Taye Currency and Adekunle Gold.

Continue Reading
You may also like...
Related Topics:education, saheed osupa