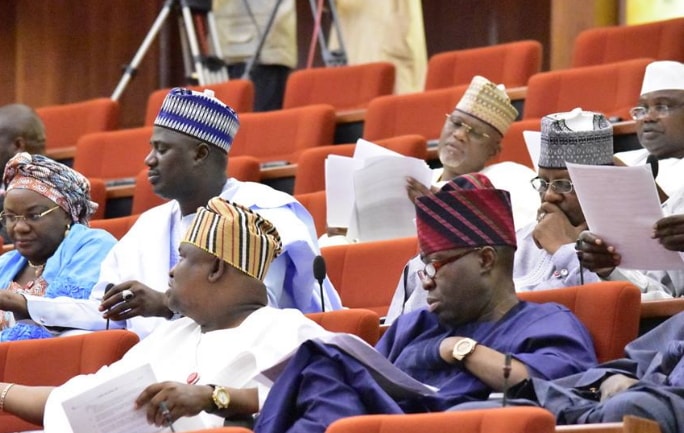 Perhaps Nigerians should plead the defence of double jeopardy against the determined effort of the National Assembly to clean off our national treasury even as they foist on us, misbegotten legislations. With the official confirmation that our senators and representatives are engaged in taking what does not belong to them, in the guise of running cost, I was hopeful that some of them would own up and openly canvass at least for institutional amendment, if not restitution. But alas, those who have spoken on the issue, tried to explain away their illegal conducts.

Nigerians have Senator Shehu Sani to thank for confirming what we have all suspected – that this National Assembly has become a double yoke on our sagging body. How can our lawmakers pretend that they don’t know that the constitution expressly barred them from fixing their salaries and allowances? How can they try to justify the perfidy they are engaged in? How can they take so much from the commonwealth, and give so little in return by way of constitutional duty?

Section 70 of the 1999 constitution, as amended, without equivocation states clearly: “A member of the Senate or of the House of Representatives shall receive such salary and other allowances as the Revenue Mobilisation Allocation and Fiscal Commission may determine.” Without amending this provision, I have always wondered under what guise the National Assembly try to appropriate the power to determine their salaries and allowances.

No form of ingenuity can change this constitutional provision, and any senator who collects any income not determined by RMAFC by whatever name called is engaged in unconstitutional conduct. Such a person is taking what does not belong to him. Of note, all the criminal laws of the country, whether federal or state, defines stealing as taking what does not belong to the taker. I have no doubt in my mind that if our country has the will, every kobo taken by any senator whether in this assembly or in the past could be recovered.

While we know that a senator in this current assembly is taking what does not belong to him to the tune of N13.5 million, we have no idea of what the members of the previous assemblies were hefting from our commonwealth. Of course this would be in addition to what they can clean from the so-called provision for constituency projects. Since the projects are to be sited in their domains and since it is them who gained the provision, they are in a position to front their surrogates to further take more of what does not belong to them.

Perhaps because the executive is knee-deep in the double jeopardy that is our lot in the hands of the political class, they are unable to stare down the legislators as envisaged by the constitution. Or is it because our democratic institutions are weak that the courts cannot declare without hesitation that what the National Assembly members are engaged in the name of salaries and allowances are manifestly unlawful? Or could it be that the executive does not appreciate its powers under the constitution or is afraid to exercise it?

The president can ask his attorney-general to approach the courts to seek the interpretation of section 70, vis-à-vis the decision of the National Assembly to decide what to pay its members. If politics precludes the president from squaring with the assembly directly, he could ask the RMAFC to approach the courts to enforce its constitutional mandate. To do nothing should be completely unacceptable to a president elected on the platform of zero-tolerance for corruption, and this should be so, even if there are unresolved allegations of taking what does not belong to them, by some aides of the president.

What is going on is a great disservice to our country. Those in power must know that the joke is on them. If they doubt, they should talk to our youths. Most of them have lost faith in the country. They refer to such cruel jokes as snakes swallowing money, money being kept in the cemetery and such bizarre tales as confirmation that we have an unserious country, whose leadership is out of tune with reality. Now with the confirmation that members of National Assembly are brazenly taking what does not belong to them, it will be further cemented in their sub-conscious that known humans are also involved in swallowing pieces of the commonwealth without any consequence.

Those who believe that they can stop the craze to get-rich-quick amongst our youths, those believe that buying tons of arms and ammunition is what is needed to stop sundry criminality, those who model a few patches of oasis as signs of a national revival, those who take what does not belong to them ad use same to make their children comfortable and refer to those children as exemplars of progress are living in denial and playing the ostrich. It is inexcusable that those engaged in public service will be entitled to brazenly break the supreme law of the country without any consequences.

Without any equivocation, a monthly take home of N13.5 million for a senator by whatever name it is called is both unconstitutional and amoral. To try to explain it away or justify it under any guise is reprehensible. Those of them in the National Assembly with any modicum of respect for their integrity should own up their mistakes and make amends. Even if they will not engage in restitution, they can turn a new leaf, and cease to be an assembly of double jeopardy.