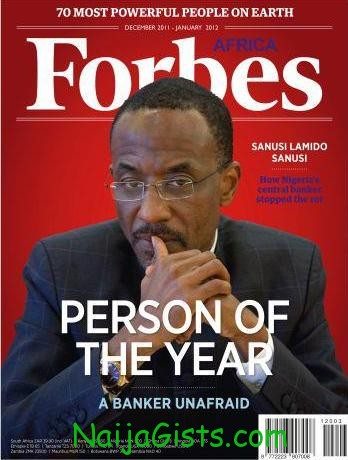 The Governor of Central Bank of Nigeria (CBN), Mallam Sanusi Lamido, has been named 2011‘s  winner of the Forbes Africa Magazine Man of the Year.

This announcement was made on Monday at the inaugural Forbes Africa Person of the Year awards organised by ABN Productions in Lagos.

Sanusi was named winner from a shortlist of five of Africa’s most influential personalities including Ellen Johnson Sirleaf, the President of Liberia, Africa’s first female Head of State; Pedro Veron Pires, former president of Cape Verde, who won the Ibrahim Prize for Achievement in African Leadership; Aliko Dangote, the President of Dangote Group; and the late Professor Wangari Mathaai, Nobel Prize Kenyan environmental and political activist.

The Managing Editor of Forbes Africa, Chris Bishop, said the short-listed candidates have had significant influence on the events of the year in Africa. (thenetonlineng)