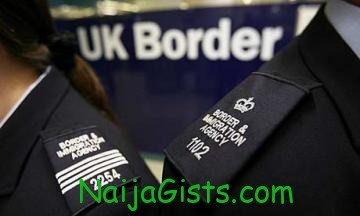 This is not the best of times for our dear London Big Boy, and top socialite, Otunba Wale Bello. This is on account of his predicament at the hands of British government. It is now reliably gathered that the top socialite, known as Wale Bello, apparently ran into the British Law Enforcement Agents about two years ago, over what many described as the use of stolen identity to fraudulently obtain a British License.

When the bubble burst, he was traced to a particular address, thereby, leading to his arrest. At the time of his arrest by men of the Law Enforcement Agents, he was looking dumbfounded. Now, he is said to have been to 18 Months imprisonment, with the judge recommending his deportation to his own country after serving his term.

Bello took it highly, as he did not appeal the decision, hence no sooner had he completed his term, he was handed over to the UK border agency for immediate deportation. As you are reading this, Otunba Bello is in his mother’s country home, while his children and wife, Dunke are in London. The decision of the British government to deport him (Wale Bello) as continues to generate discussions among London boys, who see the decision as a breach on his right to family life. Otunba Bello, for now is a gentle person who will want the rule of law to have its way. But can Otunba Bello have his way? (news of the people)