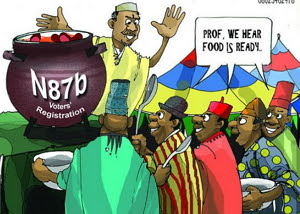 We can’t but return to the subject of snakes, monkeys and what have you, in the animal kingdom that Nigeria is gradually being turned to.

The fear of EFCC has been the beginning of wisdom since the advent of the civilian administration, dating back to the Obasanjo era in 1999 when there were no sacred cows in the pursuit of, and clampdown on, government officials with itchy fingers. The prying eyes of the eagle that the EFCC symbolized brought out the ingenuity in our people such that graves for the dead and septic tanks for human faeces became near impregnable vaults for keeping stolen money.

But where can the eagle not see from a very dizzying height? The eagle noticed night visitations to the ‘graves’ when it is not a common fad to carry out burials at night; and also saw that those who observe the dry fast religiously among the Christian and Islamic faithful still fill up their septic tanks with ‘wastes from the intestine’ even when their stomachs are supposed to have been denied of any food or beverage.

That fired the curiosity of the eagle, otherwise called EFCC, and thus emerged incredibly but true tales of top guns either in agbada and babaringa or in well-starched Army or Navy or Air Force uniforms storing their riches in pits, water storage tanks, septic tanks and even graves of decomposed human bodies, and NOT in conventional banks.

But if the EFCC guys, reputed for eagle eyes and sensitive noses, think they have all it takes to trace and track their victims, they are mistaken – from evidences now emerging.

You can jail the ingenious unarmed robbers whose only tool, as against the other conventional robbers with knives, cutlasses and guns; is the deftness of their pens. But whoever has heard that the snake ever gets nabbed and imprisoned? Yorubas have a saying that “ejo o kin ns’ewon”, to underline the truism in that assertion.

This must have been taken to heart by some kleptomaniacs who consulted the snakes to steal for them, in the crazy belief that no reprisal can be visited on the members of the animal kingdom even if discovered in the end. Not long ago, over N30 million naira got swallowed by a snake in a JAMB office. Now, we are also hearing that a monkey has ‘chopped’ over N70 million of our commonwealth, pointing in the direction that the bigger the animal, the larger the amount of money that can disappear into their belly. You can then be sure that when it is the turn of lions, rhinoceros and elephants, all the money in the vaults of the nation’s Central Bank would have disappeared before the four or eight-year tenure of any Administration.

Nigeria is no longer an amazing country but a very amusing one at that. It is a tragi-comedy scenario, aptly captured by a younger neighbour and friend in a banter over some drinks a few days ago. Dr Amos Fayehun, has a Ph.D in banking and business administration and he has a robust knowledge of philosophy. He made allusion to the insects, reptiles and animals kingdom.

He pointed to what you and I know but never ruminated upon before now. Animals are equally as organised as human beings, you know, and hespoke of small ants digging down while the family of the bigger ants known as termites build up. So organised, he said these termites are that they have among them kings and queens and the soldiers to protect them. Mercifully, these termites have a body mass that cannot store up money in their bellies, except decimate naira notes to shreds, which of course will not serve the purpose of the kleps’ of which Nigeria is afflicted.

But you never can tell: when all their bags of tricks have been exhausted, these kleptomaniacs can adopt the attitude, “if it won’t be mine, let it not be anyone’s”. Yorubas say “ka ka k’eku ma je seese, a fi ki se awadanu”, meaning if the rat can’t devour the bigger-than-the-normal beans, it had better been spilled all over the floor. Termites can then be contracted to do the hatchet job for these God forsaken thieves and let heavens be damned! Who really will save this country?

Continue Reading
You may also like...
Related Topics:Kleptomaniac Politicians, nigeria