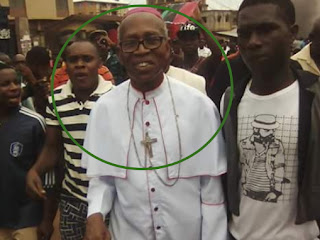 Eloquent cleric and Archbishop of Owerri Catholic Diocese, Archbishop Anthony Obinna, has come under severe criticism for openly canvassing support for one of the political parties during a public function at the weekend.

The Archbishop also drew the ire of the congregation when he digressed from his sermon during a burial mass at the St. Michael Catholic Church Ngwoma-Obube in Owerri North Council Area of the state and accused the state governor, Rochas Okorocha and the All Progressives Congress (APC) for reducing the state to a laughing stock.

The cleric was further quoted by eyewitnesses to have urged the people to ensure that the APC does not return to power in the state, adding that the party has failed the people.

According to an eyewitness, “the service was going on smoothly when the Archbishop suddenly asked those that have Permanent Voters Card (PVC) to raise up their hands. After that, he said that all those that were yet to get their PVC should do so and ensure that they vote out the APC and bring in another party because the people are not happy with the bad roads in the state, even though the government has created the Ministry of Happiness”.

The source continued that, “the Archbishop again asked the congregation if they will allow the APC to continue by allowing the governor to impose a governor on the state. At this point, a Chieftain of the People’s Democratic Party (PDP), walked up to the pulpit and was given the microphone by the Archbishop. He then started shouting that the APC has killed the state, that the APC will never come back to the state.

“At that point an APC Chieftain also came out and collected the microphone and told the congregation that the people are happy with the APC and the state governor at that point there was stampede at the pulpit as supporters of the different political parties present at service started scrambling for the microphone”.

Meanwhile, the wife of the State governor, Nkechi Rochas Okorocha, the Speaker of the state House of Assembly, Rt. Hon Acho Ihim and the Chief of Staff to the Governor, Chief Uche Nwosu and other top government functionaries were seated quietly at the front row.

Another member of the congregation, Simeon Okokwe, said that the situation almost degenerated into bloody clash if not for the maturity displayed by the government officials at the event.

He blamed the Archbishop for turning a Requiem Mass to a political campaign, noting that “he should have exploited better avenues to correct the government in the areas he felt it is not done well than his open show of partisanship”.

It will be recalled that in 2011, the Archbishop led the campaign against the re-election of the then governor, Chief Ikedi Ohakim, who was accused of beating up a Reverend Father.

But the former governor was recently absolved of the allegation by the Archbishop, nearly seven years after losing the election to the incumbent governor.

The Archbishop also fell out with the APC led government in 2015 when he allegedly endorsed the candidate of the All Progressives Grand Alliance (APGA).

Also commenting on the incident, Mr. Charles Amadi, stated that, “the manner the Archbishop is getting involved in partisan politics is becoming worrisome. As a revered cleric, he should see everyone, irrespective of political party as his children. He should advice all the politicians, especially those occupying public office without fear or bias. But the idea of taking advantage of every religious gathering to support one political party or politician against the other is highly condemnable”.

But supporters of the PDP had accused APC supporters of attacking the Archbishop for merely criticizing their party and the governor over the failure of his administration meet the aspirations of the people of the state.

They described the action as “desperation taken too far”, urging the people to vote out the party in 2019.[NAN]