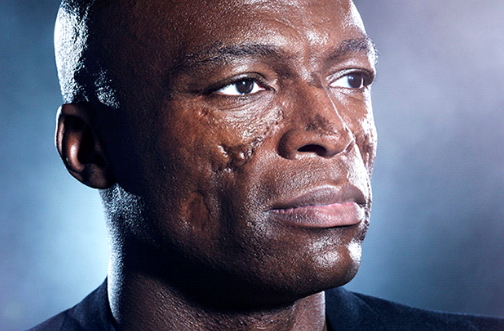 November 4, 2017 – From Scar To Star: How To Turn Your Pain Into Inspiration & Make The World A Better Place

Ernest Hemingway said, “The world breaks everyone and afterward, some are strong at the broken places”. I have come to realize over the years that we normally become stronger at our broken points! It is an inevitable fact that we will all be broken at sometimes in life or the other (it is just a matter of time) but whether we will become stronger is not inevitable, it is our choice.

Never, never be ashamed of a scar; it simply means you were stronger than whatever tried to hurt you! Every one of us has a scar; it might be an early childhood struggle, a debilitating abuse, a failed business, a scandalous past, a relationship break-up, a deep hurt from someone very close or even a divorce.

German philosopher, Friedrich Nietzsche famously said: “That which does not kill us makes us stronger”. A scar is not just a reminder of a wound or hurt, it is the mark of overcomers!

A scar must never be the reason why you do not succeed in life. At any given moment, you have the power to say, “This is not how my story will end.”  Scars remind us of where we’ve been; they don’t have to dictate where we are going.

Though scars remind us that our past is real, they must never interfere or put a limit to what we can become. In one of her articles-Life Beyond Abuse-Joyce Meyer chronicled how she was sexually, mentally, emotionally and verbally abused by her father until she left home at age of eighteen.

She shared how she was raped continuously for at least 200 times by her own father! The anguish, pain, and fear left an indelible scar on her self-esteem, but it is amazing how this same woman has grown over the years to write countless articles and books on topics that are related to abuse, self-esteem, confidence, forgiveness, rejection, gratitude, fear, addiction, and habits; topics that were gleaned out of her raw experience in overcoming her childhood abuse.

Carrison Keillor said, “It is a shallow life that doesn’t give a person a few scars”.

Nelson Mandela was formed in the crucible of life’s greatest adversity; it was in this moment of his life that he eventually discovered the purpose of his existence. It is often said that he was locked up in prison so that he could be broken down irretrievably but this inadvertently pushed him into breaking records!

Niccolo Machiavelli said, “Where the willingness is great, the difficulties cannot be great”. Life is full of stories of ordinary people that surmounted great challenges and overwhelming odds to make a mark in life. Charles Dickens was lame; Plato was a hunchback; Franklin Roosevelt was crippled by polio; Hellen Keller was the first deaf-blind person to graduate from a college and earn a bachelor degree; Winston Churchill had a devastating form of speech impediment (which he never completely recovered from); Beethoven who wrote one of the most beautiful music composition was deaf and one of the greatest geniuses and scientists that ever lived, Albert Einstein could not speak until he was four!

Scars aren’t an imperfection, they are a representation of our ability to overcome anything that stands in our way. Mike Murdock said, “Adversity is merely a proof that your enemy considers your assignment very achievable”. Behind every scar is an untold story of survival; so many times we see someone’s glory but forget to ask for the story.

Scars are evidence that we have lived and still living! Elbert Hubbard said, “God will not look you over for medals, degrees or diplomas, but for scars.”

The scars that mark Nigerian born singer Seal have long been rumored to be the result of a tribal scarification rite, which had been confirmed not to be true. Seal Henry Olusegun Olumide Adeola Samuel, better known as the platinum singing artist, Seal, has grown beyond the scar on his face to make a mark in the entertainment world. His strong, angelic voice has brought him a number of hits including the song that has become a global anthem, “Kiss From A Rose.” The cause of the scars on his face is as a result of a type of lupus called discoid lupus erythematosus (DLE) – a condition that specifically affects the skin above the neck. Lupus is a condition where the immune cells attack various body tissues!

Seal grew up watching helplessly how his own immune system was wrecking all the tissues on his face! Not only did DLE cause Seal’s cheek scars, but he had significant scalp involvement, causing hair loss. Many people like him would have shied away from public eyes to look for a career that is less unveiling as he was actually advised to seek a less revealing career as victims of DLE normally go through bouts of depression and self-esteem issues.

Seal will not allow the scars on his face to overshadow and still his soulful voice as he did the exact opposite of experts’ advice. Today, his ‘scar-face’ has become a ‘star-face’. In an interview with Rolling Stone, Seal revealed how the disease affected his self-worth and how he came to appreciate them. He told the magazine, “I got really depressed about [the scars] at first, as you can understand. Now I really like them.” Seal likes his facial scars to the point where he believes, “If I could design something, I don’t think I could do it better.” Kahlil Gibran said,“Out of suffering have emerged the strongest souls; the most massive characters are seared with scars”.

Matshona Dhliwayo said, “Your deepest scars tell the world of your greatest triumphs”. Don’t hide your scars because the scars you share become lighthouses for other people who are headed to the same rocks you hit. I want to reach out to someone out there! You think your life has been decimated by scars. You find it very hard to forgive yourself and others that have been part of the messes in your life. I have good news for you! Your messes will soon become your message.

Scars remind us of just how far we’ve come; they are stories and history written on our bodies for others to be inspired. With a renewed thinking, our scars can be our greatest ministry. Wear your scars like medals not like shackles!

Demi Lovato, one of the biggest names on social media, with an engaged combined following of over 145 million, a Grammy nominated and multi-platinum singer, songwriter, actress, advocate, philanthropist, and business woman reiterates the beauty in our scars when she said, “I think scars are like battle wounds – beautiful, in a way. They show what you’ve been through and how strong you are for coming out of it”.

One of the most challenging aspects of handling scars is when those that did the hurt are constantly around us. Don’t treat people as bad as they are, treat them as good as you are! But if you are keen on revenging, remember the words of Frank Sinatra, he said, “The best revenge is massive success”.

Let your revenge be the testimony of what you have become. If you ever get the chance to treat them the way they treated you, no matter how painful it was, I hope you choose to treat them better!

Finally, at the end, let your story be: “From Scar To Star”.

I dedicate this piece to everyone out there that is related to it in one way or the other. Real people have scars, warriors have scars, heroes have scars, winners have scars; scars are evidence of life and those without any are either hiding it or else they’ve not started living. I’m not ashamed of your scars, I’m only ashamed of the world for not understanding!

QUOTE OF THE WEEK: “It is a shallow life that doesn’t give a person a few scars”- Carrison Keillor

Continue Reading
You may also like...
Related Topics:inspiration, pain, turn