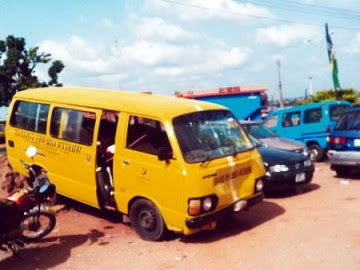 Ibitolu Mary, a 200l law student at the Obafemi Awolowo University was crushed to death today Wednesday 6th May, 2015 by a bus belonging to a private secondary school in Osogbo.

Our correspondent gathered that the deceased was on a commercial motorcycle when the bus which was said to have suffered brake failure hit the bike and knocked her down. She was said to have been rushed to a private hospital at Okefia where she kicked the bucket .

The motorcyclist was said to have survived the accident. A commuter, who was waiting to board a bus was also said to have been knocked down but survived. A hawker in front of Osogbo High School where the accident happened told our correspondent that the school bus broke down but the driver called on some passers by to assist him to push-start the engine.

He said the engine started running and the driver moved it but he suddenly discovered that the brake had failed when he was approaching the motorcycle conveying Ibitolu. “He tried to stop the bus from hitting the motorcycle but he failed. She fell off and was rushed to a hospital at Okefia where she was announced dead.

One of the members of of the the Nigerian Federation of Catholic Students at the OAU, Mr. Timothy Agbor, told our correspondent that Ibitolu was a member of the fellowship. Agbor said, ” I was shocked when somebody called and informed me that she had died in an accident. Mary was a God fearing lady. I can’t believe she is gone. It is too soon.”

He added that a requiem mass was ongoing for the deceased at Sacred Heart Catholic Church, Osogbo as of the time of filing this report. The bus and the motorcycle were said to have been taken to Dada Estate Police Station.