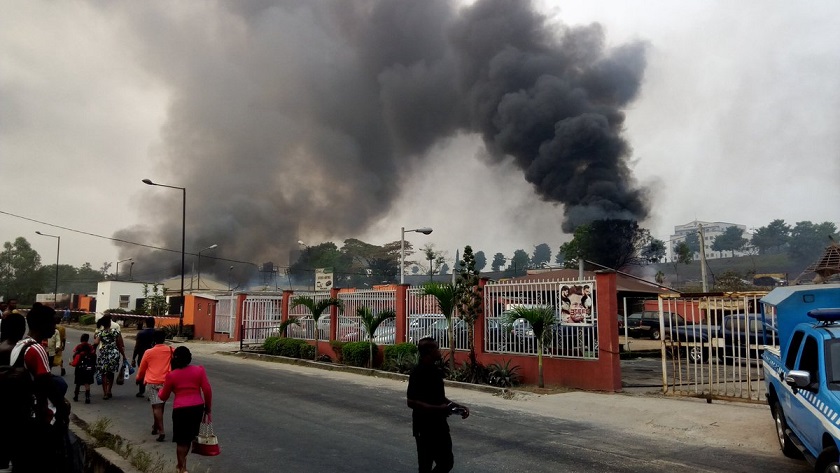 At least 2 people died of severe burns in the early hours of today in Magodo area of Lagos.

According to NAN correspondent who was at the scene of the explosion at CMD road, Magodo, it took about three hours for the fire to be brought under control by firemen from the Federal and Lagos State Fire Services, as well as officials of the Lagos State Emergency Management Agency.

The General Manager of LASEMA, Mr Shina Tiamiyu, told NAN that the charred remains of two persons who died in the fire were found at the back of the company fence, while seven others, with different degrees of burns, were found in the compound and were rushed to the Lagos State Emergency Centre, at the Old Toll Gate.

Tiamiyu said that there would be an investigation into the incident, with a view to ascertaining what went wrong, and to advice residents living close to Gas filling stations to always remain vigilant.

The Lagos State Fire Service Director, Mr Rasak Fadipe, said they got information about the explosion at about 7.15 a.m., stressing that they arrived at the scene at about 7.21a.m.

“When we arrived, the fire had covered the whole compound, but we were able to put it out with the efforts of other safety respondents, including the Police, NEMA, the Red Cross, LASTMA and the Neighbourhood Safety Corps.

“One of our men got injured. All the injured were rushed to the Trauma Centre. Some with minor injuries were treated and discharged. We used about six fire trucks for the operation,’’ Fadipe told NAN.

The Zonal Operations Controller of the Department of Petroleum Resources (DPR) in Lagos, Mr Wole Akinyosoye, who led the team to the scene, told NAN that the department would investigate the cause of the fire.

“We are here on a preliminary sightseeing of the scene. We will fix a date for inquiry into the incident. We don’t want to make statements that would prejudice the investigation,’’ he said.

The Lagos State Commissioner of Police, CP Edgal Imohimi, who also visited the scene, noted that the location of the Gas facility was not good for the safety of residents of the neighbourhood.

He said that the explosion was caused by a car exhaust which ignited the gas pipe and spread to Magodo road.

“I have asked them to evacuate all the tanks so as to avoid a second explosion,’’ he said.

A member of the House of Representative, representing the Kosofe Federal Constituency, Prince Rotimi Agunsoye, described the incident as pathetic, stressing that the Gas facility ought not to be located in the residential neighbourhood.

Agunsoye, who commended the state government for investing in infrastructure, particularly the safety agencies, called on the Federal Government to improve on the facilities of the Federal Fire Service and NEMA. [NAN]