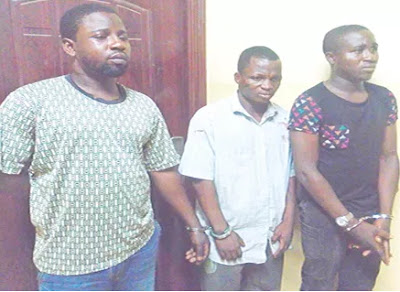 Pictured to the far right is 28-year-old Ibrahim Babatunde, a kleptomaniac who had stolen over 100 phones in Lagos and its environs.

The suspect told police he had been stealing since he was a child and that stealing has become a part of him.

He was caught while running away from the police for no cause in Ikeja Lagos.

After a burglary operation, Ibrahim came out of his victim’s home but on getting to the street he saw police on patrol and started running without them chasing him.

His action forced the RRS unit on patrol to chase after him.

Upon thorough check of his bag, over 20 phones stolen from different individual were recovered.

He reportedly confessed to the police that one 27-year-old Sanni Azeez and 40-year-old Hakeem Kamoru are the intending buyers of the phones and that they had bought stolen phones from him in the past .

The receivers were picked up in Akala area of Mushin Lagos.