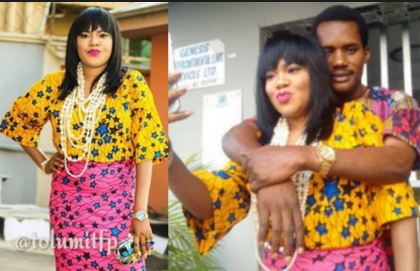 In a bid to further dissociate himself from Toyin Aimakhu, Ebony Film boss Seun Egbegbe has debunked his rumoured wedding introduction with Toyin in Ibadan.

While setting the records straight in a recent interview, Mr Egbegbe said:

“The day Toyin and I went to Ibadan, it wasn’t for any introduction. What happened that day was that my friend, Kay, who is based in the UK, was staging a funeral for his grandmother. That’s the reason we went to Ibadan. And we both put on the ankara aso ebi for the event.

It was the ankara that people saw that day and started peddling the rumour that we went for introduction because Toyin’s parents are also based in Ibadan,”.

Mr Egbegbe asked the press to stop associating him with Toyin. He added that the actress can never settle down.