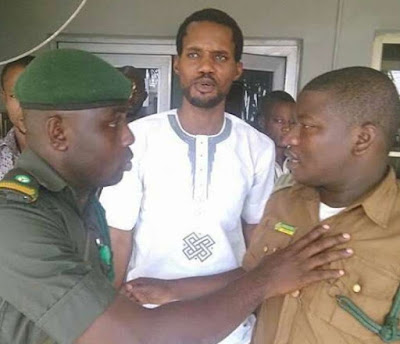 Popular filmmaker Olajide Kazeem, alias Seun Egbegbe, was on Friday, re-arraigned in a Federal High Court in Lagos, over charges of fraud.

Egbegbe, who was charged alongside one Oyekan Ayomide, were arraigned on Feb. 10, before Justice Oluremi Oguntoyinbo.

The duo were accused of swindling more than 30 Bureau De Change (BDC) operators of various sums both in local and foreign currencies between 2015 and 2017 in Lagos.

The accused, however, pleaded not guilty and Justice Oguntoyinbo had on Feb. 24 granted each of them bail in the sum of N5million.

When the case was called on Friday, the prosecutor, Mr Innocent Anyigor informed the court that the charges had been amended and the counts raised from 36 to 40.

He, therefore, urged the court to allow the charges to be read to the accused for their pleas to be taken afresh.

The accused were thus re-arraigned and they both pleaded not guilty to the charges.

After their re-arraignment, the prosecutor told the court that he had 30 witnesses in court who are BDC operators, adding that he was ready to commence trial.

But the judge said that she would prefer to begin with the testimony of the Investigating Police Officer so as to avoid cases where such police officers are transferred out of jurisdiction.

She consequently fixed March 24 for trial.

In the charge, marked FHC/L/40c/2017, the accused were said to have defrauded the BDC operators by falsely representing to the victims that they had foreign currencies to sell.

The police alleged that on Feb. 2, for instance, the accused fraudulently obtained the sum of N2.5million and 3,000 pounds from one Alhaji Isa Adamu in Lagos under the guise that they wanted to see the naira and buy the pounds.