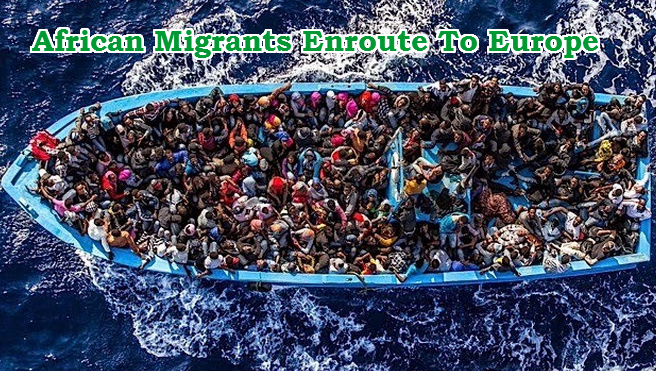 A significant news item in most Nigerian newspapers over the weekend was on the tragedy that befell African migrants trying to cross the Mediterranean Sea to Europe looking for better life. According to newspaper report, the Spanish coast guard rescued 933 migrants. Among those rescued were pregnant women and sick people of different ages and sex. In addition to those rescued, four migrants who attempted to cross the perilous sea in flimsy boats were also found dead. For the past two years or more, this reported episode has been a recurrent event involving mainly migrants from African countries like Nigeria, Mali, Burkina Faso, Burundi, Gambia, Senegal, Somalia Kenya and Eritrea. The recurrent wave of migrants illegally flocking to Europe in recent times is now becoming a political issue used for electoral purposes by far -right parties in European countries like Germany, France, Italy, Spain and Gibraltar and the electorates are listening to these anti- immigration parties.

No self-respecting African would be happy at the plight of these hapless Africans on the Mediterranean Sea. In addition to the plight of these Africans, who manage to leave Libya for the perilous journey to Europe, the dehumanizing treatment of those migrants still in Libya by the Arab slave traders is a case for adjudication at the International Criminal Court (ICC) in Hague Netherlands. The recent CNN documentary on the dehumanizing plight of Nigerian migrants in Libya assailed our national pride. The documentary showed able-bodied Nigerian men and women being sold in slave market by fiendish Arab slave traders which to me, was a re-enactment of the slave trade by the Arabs which boomed in the 19th century and which ravaged and depopulated Africa. The Nigerians and other African men were forced to work as labourers and servants while the women were used as concubines and prostitutes. There was a belated and very tepid protest on this mistreatment of Africans on African soil by the ineffective continental organisation called African Union.

Since inception of mankind, migration had always been part and parcel of human existence. In the Bible we read in Genesis 12, how Abraham obeyed God’s instruction and left his homestead to go to Canaan where he prospered. The history of Europeans is littered with migrations to other places. They migrated to other parts of the world such as the Americas, Australia, Asia and even Africa. The Europeans also enforced migration of Africans to the Americas through slave trade, a heinous trade which had also been carried out by the Arabs earlier. Africans in those days were forced to leave their God-given abode against their wishes, but this unfortunate situation is in sharp contrast to the present situation in Africa where virile and young Africans both male and female are migrating willingly to other parts of the world, especially to USA and European countries some which are less endowed than many African countries.

Decision to voluntarily leave once homestead for another unknown place with all the risks involved does not come easily. One is usually forced to migrate to other places because of unpleasant and dire situation one encounters at home. Presently in Africa, years of misrule by African rulers without exception had turned Africa into a hell on earth for African citizens. The otherwise endowed continent is ravaged by wave of poverty, political strife, civil war, religious persecution unbridled corruption in high and low places and acute youth unemployment. The future of youths in Africa has been blighted by high level of unemployment, dysfunctional educational system and socio- political dislocation. In short, the future is bleak at present for youths in Africa. In view of this depressing situation, youths in Africa have no alternative but to look for greener pastures outside the continent where their lots can be better even at a great risk to their lives. Louis Gates the black American historian once cracked a joke that if American slave ships were to be brought back to Africa now, millions of young African would willingly enter them for modern day slavery in USA because of the dire situations in the continent! The present unsavoury situation in our continent is a shame on our political leaders and the African Union for not finding a way to give hope to millions of youths in Africa.

African continent could not have suffered the present socio-economic dislocation with the attendant blighting of the future of the youths in the continent, if our African leaders from independence had been less selfish and as patriotic as leaders in other parts of the world. Africa is a well-endowed continent and huge resources from the continent had been unscrupulously siphoned to other parts of the world especially to Europe and USA. The huge money siphoned from Democratic Republic of Congo by its late dictator Mobutu Seseko, who was reputed to be richer than his country is still in Switzerland banks out of reach of his damaged country, and his many mansions in different parts of Europe are decaying while his traumatized people are wallowing in abject poverty. The same story can be told of many African leaders like the late Emperor Haile Selassie of Ethiopia, late Houphouet Boigny of Ivory Coast, late Jomo Kenyatta of Kenya, Robert Mugabe of Zimbabwe and others. In Nigeria our country, the humongous amounts now revealed to be stolen by politicians and civil servants is mind-boggling. In most African countries, money that could be used to improve the lots the down trodden people in Africa had been stolen by the so-called political leaders and their cronies and Africa is in a pathetic state because of this.

The situation cannot continue like this. The time like this calls for visionary leadership in Africa. There is a need for a concerted effort to reverse this unsavoury trend in Africa, and put an end to shame of our youths leaving the continent in droves instead of staying to develop the continent. Our leaders through the African Union should come out with a blueprint on this nagging problem facing the continent. I understand the European Union has suggested an initiation of support for African employment agencies so that more jobs would be created for youths in the continent. To me, in order to put an end to dire socio-economic situation in Africa, I think Africa needs something similar to the Marshall Plan initiated under President Harry Truman to help Western Europe after the Second World War. Under this plan which was named after George Marshal the USA Secretary of State under President Truman, the government of USA, from 1948 to 1952 spent $13 billion (nearly $110 billion in value in 2016) in economic assistance to rebuild western European economies. This initiative, apart from improving the infrastructure of war- ravaged European countries, helped to stem unbridled migration of war-wearied Europeans to USA after the war. The African Union in conjunction with United Nations should initiate this programme in Africa with massive financial support from European countries who are suffering from the brunt of the uncontrolled migration of Africans. After all, a rich man will not be able to sleep well from the groaning of his hungry neighbour. Africa is at present a hungry neighbour of European countries. Africa needs infrastructure and industries in order to generate jobs for millions of unemployed youths in continent.

In making this suggestion, I am not unmindful of the fate of other previous initiatives to help Africa by foreign donors. Most of these initiatives came to grief as a result of lack of accountability and transparency in the execution of projects associated with these initiatives. In this new initiative, the donor countries should be given free hand to execute the projects and African leaders should not scuttle the initiative by protesting that their countries’ sovereignty would be eroded. After all, was the sovereignty of European countries, compromised under the Marshall Plan? The present dire economic situation in Africa can only be ameliorated through massive inflow of investments as witnessed in Europe through the Marshall Plan after the World War II. We cannot be wasting our virile youths in slave camps in Libya and in the perilous Mediterranean Sea.

About the author:  Professor Lucas writes from Old Bodija, Ibadan.

2019 General Election In Nigeria: Beware Of Crying Wolf Syndrome
The Almighty Zoning Formula: One Of Many Mistakes In Nigerian Politics That Binds Us To Nightmare Of Bad Leadership