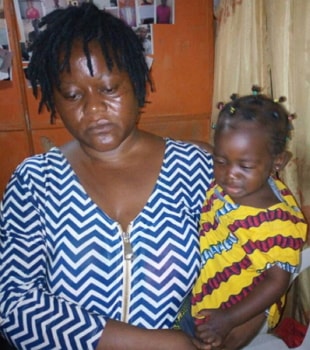 The parents of little Miss Ramudantu Matimu, a 2-year old female child, has a lot to be thankful for as the little girl was yesterday, 22nd May, 2018, rescued from the hands of one Elizabeth Ibezim who allegedly took the child away without the consent of her mother.

The incident took place at Yam market, Mile 12 Ketu, Lagos, where the child was taken away unknown to her mother who was busy selling her wares at the popular market.

When she eventually noticed that her child was missing, she became frantic and a search party was immediately raised to help her find her child.

Luck, however, ran out on the suspect when she was spotted with the child on her back by the baby’s mother who was in a near state of hysteria, as the suspect was about to board a commercial vehicle at Under-the- bridge bus stop Ketu, a reasonable distance from where the child was taken.

The desperate mum rushed to the suspect and struggled to collect the baby from her, raising the alarm which attracted a mob that nearly lynched the woman save for the quick intervention of a Police team stationed strategically near the market place to provide round the clock security.