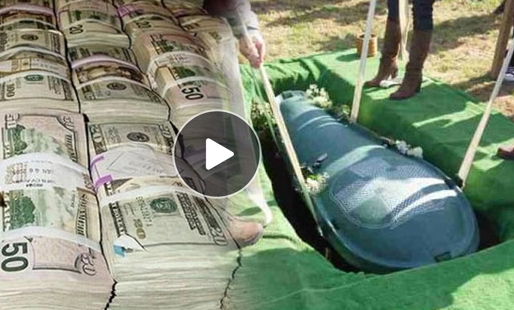 Ugandan citizens were recently stunned following a will left behind by a deceased man, ordering his wife to bury him with Shs200 million (N17m).

He said he would take the money to heaven to bribe the Almighty Father on Judgment Day so He could forgive his earthly sins.

Charles Obong, 52, until his demise worked as a senior personnel officer in the ministry of Public Service from 2006 to 2016.

According to Ugandan Monitor, he died on December 17, 2016, after a protracted illness and was buried at his ancestral home at Adag-ani village, Bar-pii parish, Aromo Sub-county in Lira District, on Christmas Eve. He was buried in a metallic coffin worth Shs20m.

The Aromo Sub-county chairman, Mr David Elic, said his brother-in-law had left behind a Will, dictating that upon his death, his wife Margaret Obong should deposit huge sums of money in his coffin.

He planned to convey the money to God as an offertory so that the Almighty Father could forgive his sins and save him from ending up in hell.

He reportedly also instructed his brother Justin Ngole and sister Hellen Aber to bear witness to ensure his wife follows his testament to the letter and secure the money in his coffin.

But Mr Obong’s Will was violated as his body was exhumed last Saturday and the money withdrawn from the grave and his would-be planned bribe before God was truncated.

During the Saturday’s meeting, the Okii of Okabo clan chief, Mr Mike Gulu, ordered that the body be exhumed and the money recovered.

According to an eyewitness, Mr Elic, when the coffin was opened, US$ 5,700, in the denomination of 100 notes, was found in the coffin. The money was removed and was being kept with the Okii of Okabo clan leader.

Continue Reading
You may also like...
Related Topics:buried, man, ugandan, us dollars