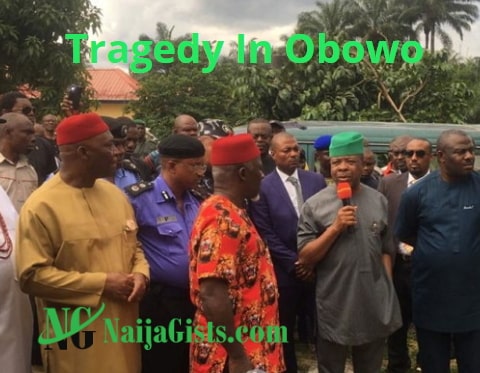 Imo State Police Command operatives are on the hunt for three brothers, John Erieka, Chinonso Obieshieke and Patrick Obieshieke who allegedly killed their blood brother, Remigius Obieshieke, over money raised from the burial of their late mother.

The victim was stabbed to deaht after a disagreement erupted on how the money realised from the burial of their 75- year-old mother, Angelina Obieshieke would be shared.

According to the state police spokesman, Orlando Ikeokwu, the incident happened last Friday at their father’s house in Umuolowoshe in Umuoshochie Autonomous Community in Obowo council area of Imo State.

“On the 22/05/2020 at about 0600 hrs, upon credible information, operatives of the Divisional Police Headquarters, Obowo, moved to Umuolowoshe, Umuoshochie Autonomous community, Obowo and it was discovered that the above named persons killed one Remigius Obieshieke during a disagreement arising from money realised for the burial of their mother late Angelina Obieshieke, 75 years old.

“Meanwhile effort is ongoing to arrest the fleeing suspects, while investigation has commenced in ernest”.

86 Year Old Man With Dementia Kills Wife In Imo
From China With Love!