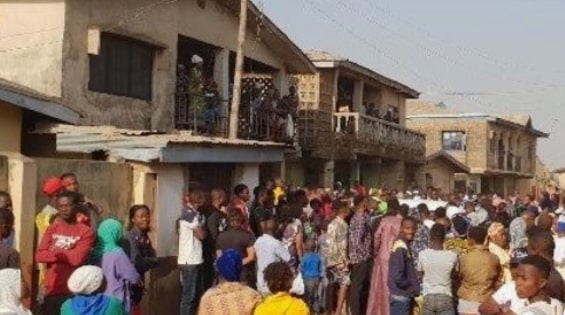 Disaster struck in Ibadan on Friday, when three children of same parents were killed in a midnight inferno after they were said to have been locked inside their apartment located at Ehin Grammar Area of Molete area of the city.

Sympathizers thronged the home where the incident occurred early Friday morning, while others were wailing, others were shouting the name of God over the sad occurrence.

Many of the sympathizers were seen asking how the children could have been locked up without both parents at home. Some among them, mostly women, were furious at the parents who were said to be away when the tragedy happened.

One of the women, who gave her name as Adijat rained curses on the parents for what she described as sheer negligence.

The one storey building was said to be one of the oldest in the area occupied by tenants, while the owners were not available for comment.

The cause of the inferno, which they said started late in the midnight could not be immediately ascertained, but neighbours said it was from candlelight that caught some flammable objects in the room that led to the fire incident.

The eldest, of the children, it was gathered was a secondary school student whose name was given as Glory while the two others were said to be in primary school.

The father of the children, whose name was given as Baba Ara, an electrician, was said to have left the children in the room last night but no one could ascertain where he had gone to while the inferno lasted.

His wife, also known as Iya Ara, was said to have gone to work as she was on a night shift.

He added that “the Police have commenced investigation as to the cause of the fire incident.”