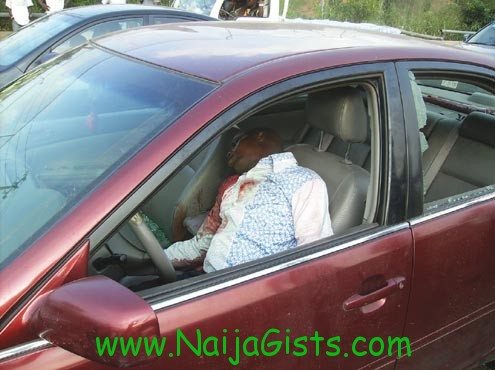 A Staff at Skye Bank Pls in Lagos was shot dead at about 6:30am on Tuesday morning while going to work.

According to eyewitness report, 2 women  who’re with the deceased in the Toyota Camry car with registration number LE NR 307 KJA at the time of the attack were unhurt

Both women who witnessed the murder of Kamorudeen Akani were too shocked to comment on this tragedy.

The Officials of the Rapid Response Squad, RRS were at the scene of the incident but the suspects had escaped.

A woman at the scene, who identified herself as Iya Lati described the incident as shocking, saying the deceased was shot several times in the chest, leaving him in a pool of blood.

The identity card found on him revealed that he lived at 8, Abosede Street, Giwa/Okearo, Ogun State but when PMNEWS got there, neighbours said he no longer lived there and that he had packed to another house.

A visit to 2 Oduduwa Street, Oke Aro where he packed to revealed that he was living alone. A neighbour disclosed that he was a former mechanic before he decided to seek employment in the bank.

“He was from Abeokuta, Ogun State and had three brothers living in Lagos. He was a nice fellow, very generous to people. I will miss him,” a neighbour who pleaded anonymity told P.M.NEWS.

At the headquarters of the bank at Falomo, Head, General Services Department of the bank who refused to disclosed his name said: “We are going to do what we can to give him a befitting burial.

“We will do something but it will not be disclosed.

“We have send our staff to Bariga police station for more information.” (pm news)

This is so tragic, may his soul rest in peace