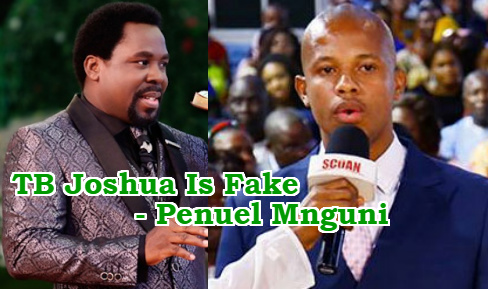 End time is here and it is high time believers stop falling victim of Pastors who perform stage-managed miracles to keep gullible people around them.

This is what happened in the case of highly controversial self-proclaimed Prophet Temitope Balogun Joshua, the founder of Ikotun-based Synagogue of ?????.

To those of you still in doubt if Balogun Joshua is a real man of God, stop doubting, seek the face of God and let him show you the hidden secret.

There is no doubt about his charity mission around the world but the fact that TB Joshua performs staged miracle has put his credibility to shame.

One of his latest victims, South African Snake Pastor, Penuel Mnguni has finally exposed him.

Penuel who was invited by TB Joshua didn’t know he’s getting himself into a big mess when he accepted his invitation.

On getting to SCOAN last weekend, his passport and ID were seized as he was forced to perform a staged miracle.

He was seen on video saying  “Pastor TB Joshua and I came to realise that what I was doing was not scriptural.”

Please watch the video below to see how Penuel was saying out what he claimed a woman was forcefully telling him.

From the above video, it is obvious Penuel wasn’t talking by himself. Can you see the momentary pause.

It is only the gullible that will believe the fake miracle most of these end time pastors perform all in the name of keeping their churches full.

If you still believe TB Joshua is a true man of God, you have entered a last chance bus and you need deliverance… Blast me if you want…. I have told you the truth… Make u no say I no warn you oooo.

Meanwhile, Penuel debunked all he said at TB Joshua’s church on getting to his country.

Here is what he told his followers about his encounter with TB Joshua and his false miracle gang members. 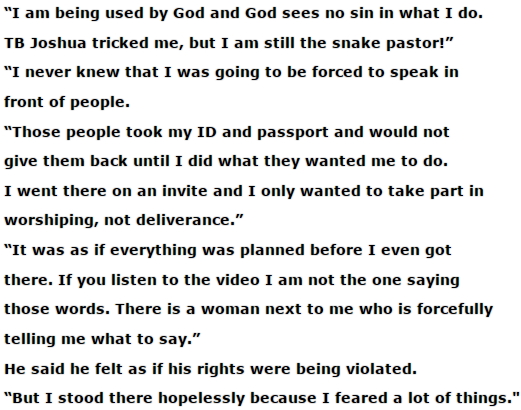 Believers beware… Stop going to churches all in the name of miracles.

It is end time… Make una open eyes. A word they say is enough for the wise.