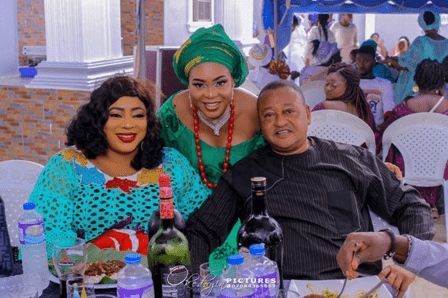 Sola Kosoko Features Her Dad, Sister, and Adekola Odunlade In a New Movie

Nigerian actress and film-maker, Solo Kosoko has featured the likes of her dad (the popular Nollywood actor, “Prince Jide Kosoko”), her sister (Bidemi Kosoko), and the popular Nigerian comedy actor “Adekola Odunlade”, in her new movie titled “The Voice”.

Sola takes the role of the lead actress in the movie, where she plays as “Abina”, and she expressed great joy and pleasure, for working with her father, and sister, on the same movie set.

The actress who is winner of several awards like the BON Awards, and AMA Awards, already has over 70 movies in her archive, and this number keeps counting.

Her latest movie “The Voice” is expected to drop soon.

Some actors who were featured in this movie are; Ibrahim Chatta, Afeez Eniola, Michael Okon, and many others.

We just have to keep our arms crossed, as we wait for this movie to drop soon.