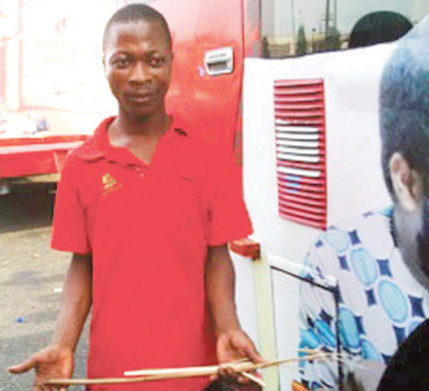 A BRT bus driver got his own share of military brutality yesterday after a soldier riding a danfo bus got a cane and whipped the living daylight out of him.

The unidentified soldier accused the driver of putting the lives of commercial bus(danfo) in which he was riding at risk.

He reportedly ordered the danfo bus driver to give the BRT bus driver a hot chase and block him on top of the bridge on the Marina.

At this point, the soldier snatched a cane from a motor park boss in the area and jumped on the BRT bus. He allegedly whipped the bus driver, Idowu Kolawole (pictured above) on the head repeatedly with the cane and kicked him with his boots.

The passengers inside the BRT bus heading for Oshodi from Marina begged the soldier to stop but he challenged them by saying;

“Are the people in that Danfo bus not human beings?” before jumping off the BRT bus.