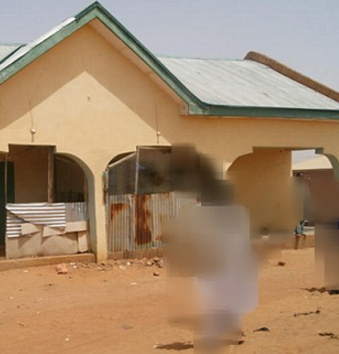 Daily Sun gathered that the incident occurred at number 25, Akintobi Badejo Street, Sabo when the middle-aged man whose name could not be ascertained as at press time, allegedly pushed down his 69-year-old father during an argument.

Baba Basirat was said to have fallen, collapsed and died instantly.

On Wednesday morning, the suspect again went wild and vandalised a blue Honda Ac­cord with registration number Lagos, AGL 763 AQ which belonged to his brother-in-law.

He was later over-powered, given some sedatives and bound hands and legs.

In a bid to cover-up the in­cident from the police and the public, journalists who rushed to the scene of the crime were attacked by family members.

Attempts were also made to seize the camera of the Nigeri­an Television Authority (NTA 12), crew, Abeokuta. The sta­tion’s vehicle which conveyed reporters to the scene of the crime was prevented from leaving.

The family members que­ried the interest of the jour­nalists in what they described as a “family affair.”

Daily Sun gathered that a scuffle had occurred between the father and his son at the entrance when the former took him to church on Tues­day for deliverance from drug addiction.

It was during the scuffle between them that the son pushed his father who col­lapsed and was later con­firmed dead at a private hos­pital.

The 65-year-old man who was an indigene of Ogbo­moso, Oyo State was said to have been rushed to Mercy Hospital in the Onikolobo area of Abeokuta where he was confirmed dead.

When our reporter vis­ited the scene, the killer son was said to have been put on sedative and kept in a room with hands and feet tied. The corpse of his father was also being kept in another room.

“As a parent, the father was not happy that the boy smokes Indian hemp and so much has been spent on him and he was not ready to take him to psychiatric hospital because of finance, that was what took them to the church before he came back and broke the wind screen of a car belonging to his brother-in-law.”