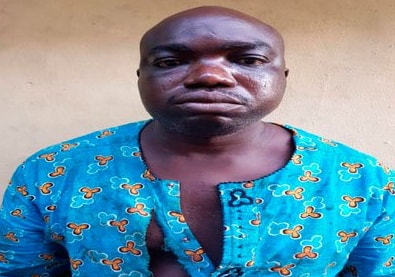 A man identified as Bakare Nurudeen has been arrested for allegedly hacking his 65-year-old mother to death.

The victim simply identified as Bosede aka Iya Fali was accused of sitting on her late husband’s property by her killer before the attack was carried out.

He was said to have gone wild before stabbing her several times at their residence in Oremeji area of Ilasamaja, Mushin.

The suspect who left home about 12 years ago recently returned to the area to claim his father’s property.

He reportedly warned his mother that he felt like killing someone after accusing her of sitting on his late father’s property.

The victim allegedly told him that he would be jailed if he try such.

At the height of argument, the suspect reportedly picked a knife and stabbed her to death.

He allegedly begged for his life and urged the first responders to call police.

The corpse of the late widow has been deposited at Mainland General Hospital Mortuary for autopsy as police transferred the suspect to SCIID Yaba for investigation.