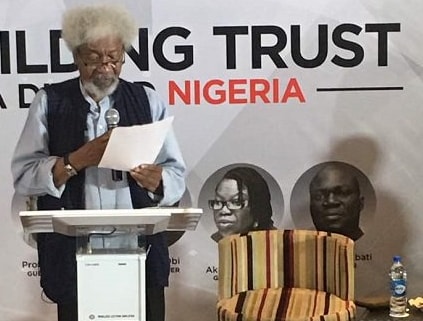 Wole Soyinka Laments, Says Humiliation Of Nigerians By The Military Forced Him To Relocate Abroad

Professor Soyinka has described Nigeria as sick and empty, deserving of the term “shithole” as described by United States President, Donald Trump.

The Nobel Laureate  said this while speaking at the Ripples Nigerian Dialogue titled “Rebuilding trust in a Divided Nigeria,” held at The Wheatbaker Hotel in Ikoyi, Lagos.

“We have become laughing stocks in the eyes of the public.

“We have earned the term of shithole. Nigeria is sick and empty. Some retrogressive forces won’t just stop. Everything Nigeria touches rusts.”

“The treatment of Nigerians by the military led me to relocating to a saner clime. I remember invading Obasanjo’s residence in Lagos and challenging him concerning the way Nigerians were being treated. It is a disgrace to us, as a nation. We have been left behind in nearly every field.

“There are lessons to be learnt from the diaspora. We need to peep across the Atlantic to see how other countries have been faring,” Soyinka said.