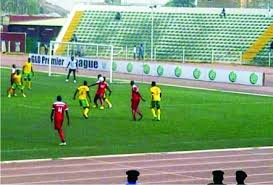 Footballer Players and officials of hosts Wikki Tourists FC of Bauchi and visiting Warri Wolves FC, as well as match officials, were on Wednesday attacked by suspicious honey bees.

They were all forced to stay flat on the pitch of the Abubakar Tafawa Balewa Stadium in Bauchi when the bees attacked them during their match.

Mamuga Aminu, the match’s centre referee, ordered the players to lay flat as a defensive tactic as the column of bees flew through the centre of the pitch.

The News Agency of Nigeria (NAN) reports that all the players and officials were forced to lay down for over five minutes, thus bringing the game to a halt.

The bees had earlier sent spectators at the western side of the stadium out of their seats when they first entered the stadium.

Spectators in their hundreds took to their heels and returned to their seats later when the bees headed towards the players.