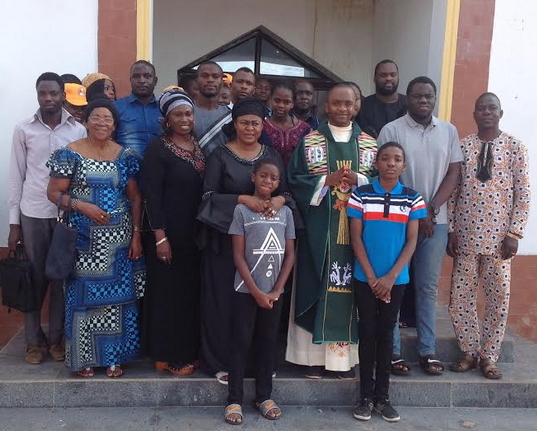 September 29, 2016 – Photo: Senator Stella Oduah’s Holds Thanksgiving Mass For Late Son, Priest Urged Guests To Pray For Him To Get To Paradise

Yesterday, a thanksgiving mass was celebrated in remembrance of the death and burial of the late Master Maxwell Chinedu -Oduah-Etoromi, 28 year old son of former Aviation minister and presently the senator representing Anambra North Senatorial zone at the Senate, Princess Stella Oduah.

During the service,  the officiating priest Rev Fr Augustine Umeh told the congregation that the late Maxwell left a legacy of charity and selflessness which the entire family should adopt as a guiding principle.

According to Fr Umeh, life becomes much better for all when the rich and affluence share their wealth with the poor rather than exhibiting selfishness and greed.

Father Umeh urged Senator Oduah and other members of the family to pray always for their late son so that his position in paradise would be justified before God, the Angels and mortals.

After the mass, Senator Oduah who was seriously weighed down by the death of her son showed big signs of relief as she was seen exchanging pleasantries with a handful of visitors who worshipped with her in the church.

Pictured above is Rev Fr Augustine Umeh, Senator Oduah, her children, relatives and visitors posing for photograph in front of the church.