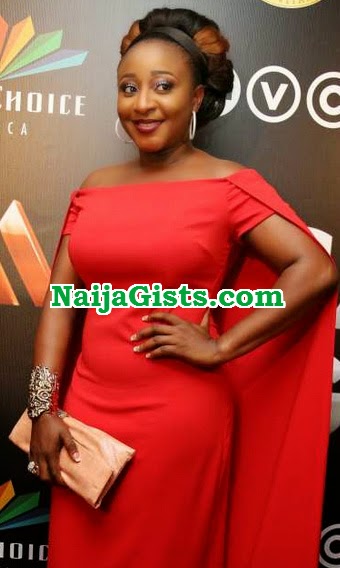 Have you guys seen Ini Edo’s beautiful dress, if you haven’t just do a quick search on NaijaGists.com.

Here is what ThisDay columnist Azuki said about the dress:

Can Nigeria stars start being original with their looks for a change? I know you all aspire to be actors in Hollywood or be another Julian Rancic on the red carpet, but originality is the best land for discovery. Patronise your Nigerian designers who are even ready to give free clothes or even the upcoming designers biko, maybe next time, Ini Edo should seek advice from Genevive Nnaji and Kate Henshaw about the Nigerian designers who made the dresses they wore to the awards, their make-up artistes and hair stylists were awesome.

l am not saying she should not wear the same Ralph Lauren dress Lupita Nyong’o wore to the Golden Globes in 2014, but not exactly the copy. If you are so in love with the dress, you are such a super rich star- wear the real thing. You could have changed the color from red to green or yellow, or alternate the style like Rita Dominic did when she also copied Gweyneth Paltrow long cape dress to the Oscars in 2012. Stephanie Coker in 2013 at the Headies Awards copied exactly the red dress by Azzedine Alaia that Rihanna wore to the Grammy Awards in 2013. On the red carpet she claimed that the outfit was designed by Mai Atafo but l heard from a reliable source that Mai did not design the dress for her, so who did?

Before Ini Edo left her house, what did she see in the mirror? Did Ini Edo style herself or someone did and who could that be? What on earth made her feel you could wear a loop earring on a subtle exotic glamorous evening dress? Or is Lupita her role model or muse, even at that, she has to explain the shift in cape on her own Nigerian made Ralph Lauren dress, biko. And her two-tone colored hair did so much damage to the outfit , l will just drink my Orijin and pretend l didn’t notice that hairstyle which brings to mind Iyanya’s song, ‘Ekate wants to dance’ and yes Ekate has finally come to Lagos.