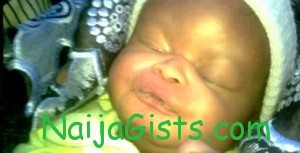 A 3-month-old baby boy who stolen from her mother Charity Nwuzor from Ebonyi State has died in Ifite-Awka, Anambra state. naijagists.com

Daily Sun reported that the child, who was stolen from a private hospital in the commercial city of Onitsha through the help of the doctor and fiance to Charity and kept in the orphanage’s custody allegedly developed an unusual complication, which caused blood to ooze out from his mouth and nose until he died. The child, who was yet be given a name in the orphanage, was delivered by Miss Nwuzor through a cesarean operation in a hospital in the commercial city of Onitsha.

It was further gathered that after the delivery of the baby in the hospital, the medical director allegedly sold off the baby to a woman believed to be an employee of the Nigerian Immigration Services even before the young mother was able to recuperate from her cesarean operation. Meanwhile, the baby was later recovered by policemen from “D” Department (the state CID) Awka, in November 2012 following a written petition dated 17/9/12 and addressed to the state Commissioner of Police, Mr. Balla Nasarawa, by counsel to Miss Nwuzor, Mr. Afam Akonanya.

The baby was taken to the orphanage for safe keeping pending the resolution of the conflict surrounding the ownership and birth of the baby but he died on January 5 in a mysterious circumstance. The Director, Child Welfare in the Anambra State Ministry of Women Affairs and Social Development, Mr. Emeka Ejide, described the death of the baby as unusual, adding that the child did not die in their custody or the state government-owned orphanage.

Ejide, however, disclosed that the child died in Beacon Hospital also in Awka where the baby was taken to for treatment, after contracting slight malaria and further said the state Ministry of Women Affairs and Social Development received the news of the death of the baby with shock. When contacted, the Medical Director of Beacon Hospital, Awka, Dr. Anikpo expressed surprise at the sudden death of the baby, adding, “I am still shocked that a baby who was brought here few days ago to be treated of slight malaria and was certified healthy and discharged could suddenly develop such complication that led to blood gushing forth from his mouth and nose which finally led to his death.

“Our treatment, which we gave to the baby was successful, so, I cannot make head or tail of the circumstances that led to his death,” he said. Reacting to the death of her son in such controversial circumstance, Miss Nwuzor said, “since my baby was recovered from the syndicate that sold and bought the baby and was kept at the orphanage, I made every effort to take custody of my son but the Police IPO, Mr. Remy Okeaku, gave me stringent conditions that made it impossible.

“The IPO insisted I must bring my biological father and mother as well as the traditional ruler of my community before taking the child. Moreover, I never knew he had collaborated with the doctor and the immigration woman that bought my son to frustrate me. Lately, I discovered that the trio did come secretly to visit my baby from time to time at the orphanage. What is their motive of visiting my baby?”