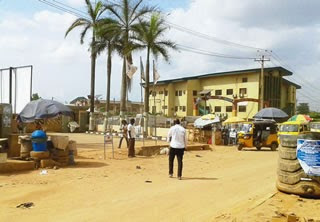 The police in Lagos State have arrested a driver, identified simply as Utebor, for the death of a lady in his apartment.

We learnt that the suspect picked up the victim around Baruwa Estate in the Ipaja area of the state, on Friday.

A police source told our correspondent that investigations showed that the suspect took the lady home and as they were having sex, the victim died.

A neighbour was said to have alerted policemen from the Ipaja division, who arrested the suspect and deposited the victim’s corpse in a mortuary.

Our correspondent learnt that nobody knew the victim’s name and address, just as no member of her family had shown up.

The source said, “The man was driving his cab that fateful day when the lady flagged him down.

“She asked him for money, but he told her he didn’t have any money on him. He then asked her to enter the car and follow him home.

“He took her to his apartment in Baruwa Estate and it was that night that the girl died. Investigation showed that it was while he was making love to her that she died. It was the following morning that somebody alerted the police.”

Our correspondent, however, learnt that the suspect, in his confession told the police that he had picked the victim from the bus stop and taken her home when she suddenly died.

Another source explained that the suspect had continued to plead his innocence, saying he only helped the deceased and did not have sex with her.

He said, “The man did not deny taking the girl home. But he explained that while she was in his room, she started shouting that she had a headache, and before he knew what was going on, she fell down and died.

“He said he was confused and didn’t know what to do. But obviously, that may not be all the truth.”

Our correspondent, who visited the area, observed that residents were not willing to talk about the incident, as they claimed that they were not aware.

It was, however, learnt that the matter had been transferred to the Department of Criminal Investigation, Yaba, where the suspect was undergoing interrogation.