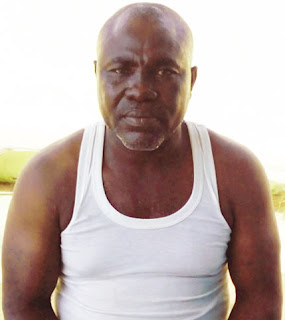 Mr Quadri Adesina, a vigilante group commander in the Oke Aro area of Ogun State has been arrested by the police after an alleged accidental discharge from his gun killed a 23-year-old man, Yusuf Azeez.

Azeez reportedly wanted to wrest the gun from the suspect when a bullet hit him in the thigh. He was rushed to a hospital in the area, where he was pronounced dead on arrival.

We learnt that the deceased’s mother, 42-year-old Toyin Akintayo, had invited Adesina and his colleagues to her residence on CAC Street, Oke Aro, around 8pm on Tuesday to apprehend Azeez, who allegedly threatened to kill her.

It was gathered that Azeez had arrived at home on that day at about 6pm and requested his dinner. The mother was said to have explained to him that she didn’t have enough money to prepare a meal.

Trouble started after the mother, who sells confectionery, gave him N200 to buy food, saying that was all she could afford. He reportedly smashed a bottle on the ground and vowed to kill her.

“I wanted to break my fast on that day with garri when he arrived at home. I said there was no kerosene in the stove to prepare food for him and his younger brother. I gave him N200 and the brother N70. He said the N200 was small and threw it at me.

“I explained to him that it was all I had and that we wouldn’t have been in the situation if he did not steal the compressor of my freezer, which I used to sell ice blocks. I also advised him to find a job. He became angry and started threatening me with a knife and the shard of a bottle. He said he would not allow me to sleep at home that night and vowed to kill me.

“I sneaked out to call members of a vigilance group beside our house. They followed me home and tried to pacify him. He fought them and fought for the control of a gun that one of them carried. The gun exploded in the process and he was injured in the thigh. He died at a hospital near here.”

Akintayo described her son’s death as a relief to her, saying she could no longer endure the shame his notoriety for “stealing and street fighting” had brought to the family.

She added that his son’s gang members stormed her house on Wednesday and threatened that she would pay for Azeez’s death.

She said, “I enrolled him in three different secondary schools, he dropped out. I took him to five different furniture experts to learn the work, he absconded. He went into barbing; I gave him N85,000 to rent a shop and furnished it for him. He didn’t go to the shop until the rent expired.

“His death is a relief to me and the family. He was too troublesome. There was a time he beat up an Oodua Peoples Cogress member while we were living in Idimu (Lagos). I spent a lot of money on the man’s treatment.

“A few weeks ago, he fought in Agege. He was seriously injured. He had been arrested many times by the police for several offences.”

The suspect, 48-year-old Adesina, who is in detention at the Agbado Police Division, said Azeez had beaten the two security guards that accompanied him to the scene, adding that he only wanted to prevail on him from causing further havoc when his gun exploded.

He said, “There was no light when we entered the building. He attacked us and two of my boys fled. I told him that I came to make peace. He said he didn’t fear my gun. He descended on me and wanted to snatch it. We were dragging it with each other when it exploded. I didn’t kill him. He would have killed me and his mother if he had access to the gun.”

He said, “The Divisional Police Officer of the station, CSP Abioye Shittu, led operatives to the scene and the suspect has been arrested. The case has been transferred to the State Criminal Investigation and Intelligence Department, Eleweran, Abeokuta.”