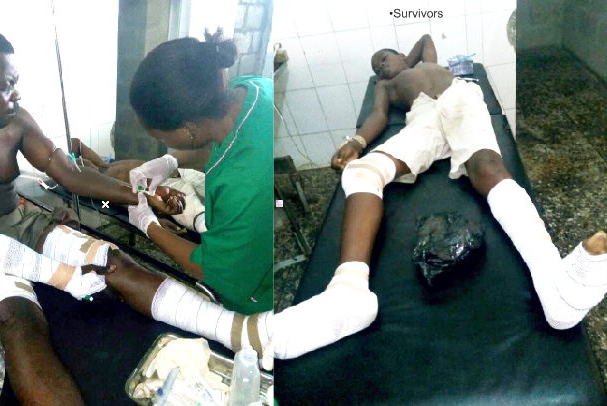 It was a path football lovers in Nyaghassang Community in Calabar Municipality, Cross River State, had trodden for years – watching football matches at a popular viewing centre on Access High School Road.

Hence they had not the slightest inkling of the tragedy that lurked in the corner when they gathered to watch the Europa League quarter final match between Manchester United and Anderlecht football clubs on Thursday night.

A high-tension cable, which, according to a Port Harcourt Electricity Distribution Company (PHEDC) official, was the UNICAL 11KV Feeder, fell on the viewing centre at about 9.30 pm, leaving many of the passionate football lovers in the building electrocuted. 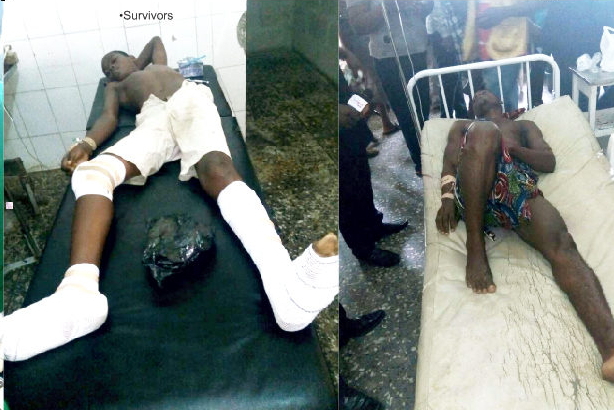 Initial reports put the casualty figure at more than 30. But when our correspondent visited the scene, several eyewitnesses said the number of people that died on the spot ranged between seven and 10.

The Chairman of the Medical Advisory Committee of the University of Calabar Teaching Hospital (UCTH), Dr. Ogbu Ngim, who represented the Chief Medical Director, Dr Thomas Agan, said 18 persons were brought to the hospital with various degrees of burns. He said seven were confirmed dead, while the remaining 11 were responding to treatment.

Rather than vacate the hall, they urged the owner of the centre to put on his generator, saying that there was no current in the cable that fell on the roof. Unfortunately, moments after the owner of the viewing centre switched on the generator, public power was restored and fire erupted in the building.

An eyewitness recalled that the building suddenly began to vibrate while the fire raged. In the ensuing stampede, many of the viewers escaped while many others got electrocuted.

“As their bodies got in contact with the zinc, which now had current running through it, many of them got electrocuted. That was how the problem escalated,” the eyewitness said.

A young man who identified himself simply as Innocent said:

“I was inside the building when we heard the first explosion. Some of us came outside and we saw the cable that had fallen on the roof. In fact, some people were passing under the cable as they were calling the owner of the viewing centre to put on the generator so that they could continue watching the match.

“When the generator was switched on, people went inside. My saving grace was that I stood outside, waiting for the DSTV (Direct Satellite Television) to finish loading. You know that DSTV normally takes time to load when it goes off. So I stood outside for some minutes. But just as I was going inside to check if the match had restarted, I saw a close friend who had sat in front of me running out. His body touched the zinc wall and he fell to the ground.

“Before I knew it, people started running out in numbers, trying to get out of the door at the same time. That was how they started falling one after the other right in front of me. I saw my friend die in my presence but there was nothing I could do.

When the fire had died down, people came around to help remove the bodies. They were just pulling bodies out like logs of wood. It was like hell fire. This is something that would traumatise me for the rest of my life. Those who did not rush out during the incident were the ones that were safe.

“For me, I counted eight people who died on the spot. They were six men and two women. Thank God it did not happen on the day Barcelona played Juventus or the day Chelsea played Man United, because the place would have been more jam-packed and the causalities would have been more.”

Another young man who identified himself as Dominic said he had paid to watch the match and was already watching when he got a call from a friend to join him for a drink.

He said: “I had already paid N50 and was watching the match. Then, a friend of mine called me to join him at Doris O Hotel, so I left and joined him there and continued watching the match also. It was when I came back here that I learnt of the disaster. It was the call from my friend that saved my life.”

Mr. Chris Abang, who also would have been at the viewing centre, said he was delayed by his wife.

He said: “I had just come back from Ogoja and was in a hurry to go and watch the match. I am a Man U fan, so I could not wait to watch match. But my wife insisted that I stayed back and eat something. I decided to listen to her. By the time I arrived the viewing centre, the whole incident happened right in my presence. My wife’s delay saved my life.”

But a certain Emmanuel Okon, who lost his life in the incident, was not so lucky. According to his wife, Mary, being a Manchester United fan, he left to watch the match, ignoring her plea that he should eat before going for the match.

Speaking between sobs, she said:

“I was boiling rice for him, but he decided to go and watch the match. I told him to stay back and eat but he said I should come and call him when it was ready. When the incident occurred, I went there to look for him.

When I finally found him, he lay on the ground lifeless. There were bodies everywhere on the ground. I carried him with the help of his nephew, but he was not responding. His body was cold. With the help of a neighbour who is a taxi driver, we took him to the hospital where we were told that he was dead.”

“That evening, my uncle and I were just joking about the match. He is a Man U fan and I am a Chelsea fan. So we were playfully arguing and I told him that Man U would lose but he said they would win. When it was time for the match, he called me to go with him to watch, but I felt somehow and decided not to go. Normally, I would be there to watch the game, but I suddenly did not feel too well. People were even surprised that I did not go to watch.

“While we were at home, we heard about the incident. I got there and saw my uncle dead. My uncle was a very loving and kind person. He was the one taking care of me. My school fees, accommodation, feeding, clothes, everything. I don’t know what I would do now that he is gone?”

Spokesperson of the Port Harcourt Electricity Distribution Company (PHEDC), John Onyi, said the company was yet to ascertain the number of casualties.

He said: “We are not here to apportion blame but to investigate. It was UNICAL 11KV Feeder that snapped and fell on top of the roof. The viewing centre was in PHEDC’s right of way. There should be at least a 12.5-metre gap with the high-tension cable. But as you can see, there are buildings right under the high-tension cable.

“Our investigations would include who gave approvals for buildings to be constructed under high tension cables. But like I said, we are not here for blame. Our condolences go to families that have been affected. We appeal for calm.”