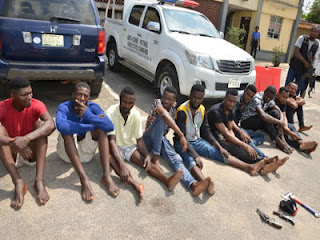 It was gathered that Nwachukwu, a resident of 7, Ago Street, Ikotun, was seen on Fagbemi Street, Amukoko and was intercepted after policemen said he was suspicious.

Upon searching the suspect, the police discovered a locally-made revolver pistol and one unexpended cartridge.

“Detectives recovered a locally made revolver pistol, a locally made single barrel gun, unexpended 7mm ammunition, one battle axe and a Vikings’ beret with logo. Suspects would be charged to court at the conclusion of investigation.”

Another suspect, Saula Toaheed, denied being a cultist, claiming that he was arrested without cause.

Toaheed said he was going to buy noodles with his brother when they were whisked into the bus the policemen brought.

“Around 10:30pm on April 5, my brother and I were going to eat noodles at Isheri, when a bus suddenly parked beside us. A policewoman and a policeman came down. The woman approached us calmly and asked us to enter the bus.

“After we entered the bus, they started picking some people along the road and moved us to the station. We were not told what our offence was. They just took us to the station. We do not even know those other people. We slept in the cell till the next day and up to this moment. They later drove us down to Isheri Area ‘M’. The police took all the sledge hammers and diggers inside the bus. They brought the hammers from their station; they just want to put false allegations on us.”The police have arrested nine suspected cultists said to be terrorising Amukoko in Ojo, Lagos.

Lagos Police Commissioner Imohimi Edgal said the case was transferred to the Federal Special Anti-Robbery Squad (FSARS), Ikeja, where the suspect confessed to being a member of the Vikings cult group.