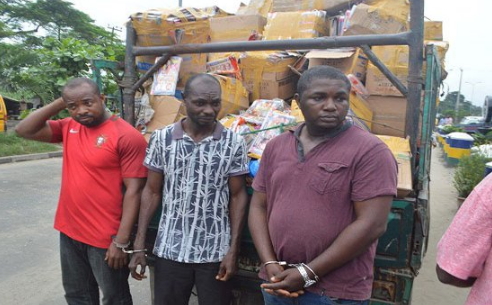 After last Monday’s raid of the notorious Alaba Market where three suspected pirates were arrested, the taskforce set up by the National Film and Video Censors Board (NFVCB) against unauthorized distribution/uncensored and unclassified movies, on Wednesday, increased its arrest to four, while on Thursday, it also confiscated a container-load, consisting 103 sacks of DVDs of different titles, believed to have been imported from China.

The 8-man taskforce made up of largely members of the Film and Video Producers and Marketer Association of Nigeria (FVPMAN) alongside the Nigeria Police, on Monday, arrested three men – Ndu Celestine, Okechukwu Ikuagwu and Austine Ugokwe – and confiscated several film titles and machines said to be worth N50million. The suspects were immediately taken to Abuja from the Area E Police Command, Festac Town.

The fourth suspect popularly called Mayor is said to be the assistant Financial Secretary of the Fancy and Furniture section of Alaba International Market, where CD and DVD business holds sway.

Speaking to newsmen at the Area E Police Command on Monday, Adedayo described the unlawful distribution of uncensored intellectual properties, and piracy as a serious economic crime.

“We are saying no to unwholesome, unclassified and uncensored content visa-a-vise piracy. Piracy is a serious economic crime. What they are doing to intellectual properties is worse than what you can imagine.

“We had warned them to stop the unlawful act. Unfortunately, they didn’t stop and we promised the stakeholders and those concerned within the film and creative industry that we are going to start action. So, this is one of the actions that we have promised them, and it is going to be continuous because now, we have the full support of the police. It makes our job easier; the lawyers are ready to prosecute.”

According to Okoye, “majority of the stakeholders have been rendered prostrate by the activities of the pirates, and no more operating, some of them have gone broke.

“If you go to Alaba where our business used to thrive, the situation is not the same, as cosmetics and phone accessories sellers have taken over because the pirates have driven us away and feeding fat on our sweat. They have even started investing in hospitals and other businesses while the creative industry is getting broke.”

“The Bank of Industry floated a loan scheme for people to come and take and produce contents to engage Nigerians to be productive, but all those who took the loan are owing the bank. These films are genuinely produced but before my company, G-Media could release them, they had been pirated and we have been tracing most of these people who have been hiding themselves inside Alaba. Imagine Alaba operating as if it is a sovereign state of its own.”

One of the suspects, Austine Ugokwe from Anambra State when questioned by our reporter said he was innocent and was set up by his Liberian friend called Mr. Obi.

“I was set up by someone. It was a friend Mr Obi who usually comes from Liberia that called me to come and he directed me there and immediately I got there, I saw taskforce people, and they arrested me. I am a business man, I sell Nylon and CDs,” he said.

When asked how he got to know Mr. Obi, he said “he buys blank CDs from me.”

On his part, Celestine Ndu said “I’m being accused of piracy. I was arrested because I was trying to help someone to package his goods (CDs).

“I am not the one doing it, I was just helping the owner to package it. The owner calls me to help and he gives me some money. Mr Bassey the man who called me to come and package the CDs for him is not my boss. I don’t know where he lives; I only know his shop in Alaba, shop GJT28.”