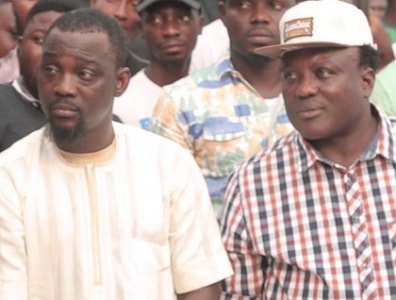 Top singer Taye Akande aka Taye Currency has pledged to put an end to the rivalry among two Fuji greats, Saheed Osupa and Wasiu Alabi Pasuma.

He revealed this while performing at the semifinals of the 2018 edition of ‘Ariya Repete’ at the National Stadium, Lagos last weekend.

He said he has since adopted Fuji exponent Saheed Osupa as his father and Wasiu Alabi Pasuma, with whom Osupa is in contention, as his elder brother. He was also quoted as saying that he holds both as his mentors and so intends to put an end their rivalry.

It will be recalled that Osupa and Pasuma have always been in contention over who deserves to be called the King of Fuji music, a title which the latter has always laid claims to. This claim has in the past pitched most of the Fuji musicians as well as their fans against one another.

Meanwhile, it was a touching moment during the competition as Taiwo and Kehinde Alli, popularly called Twinzobia mounted the stage to perform. Before the performance, Taiwo made a remark that got emotions high and gave them lots of cheers from music fans at venue.

Twinzobia shared a story on their career before winning the Goldberg Talent hunt in 2014 and the significant progress they have made since they won the competition.

According to the multi-talented artists who sing Fuji and Juju with ease, winning the 2014 edition of #FujiToBam has impacted their lives in tremendous ways.

The twins further said, winning 2014 edition was a most remarkable turning point in their lives.

Ariya Repete is an annual talent hunt organised by Goldberg Lager Beer, the initiative seeks to discover young talents in the Yoruba traditional music including Fuji and Juju

The grand finale of Ariya Repete 2018 is scheduled to hold at Trans Amusement Park, Ibadan, the Oyo State capital on Friday, May 11.

Continue Reading
You may also like...
Related Topics:fight, osupa, pasuma