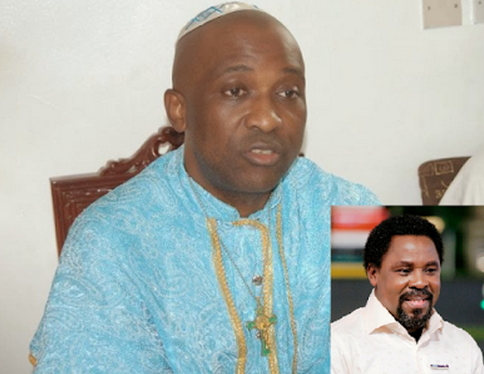 Controversial Prophet Fatai Balogun Joshua’s best friend, the founder of INRI Spiritual church Primate Ayodele has started mobilizing people to beg Lagos State to pardon him over a building collapse that killed over 150 miracle seekers at his church last year.

While speaking to journalists today in Lagos, Ayodele urged Nigerian Pastors to stand up for TB Joshua citing that the building collapse was a spiritual attack.

“The Coroner recently passed judgment against the Synagogue Church of All Nations (SCOAN). I will however like to make a special comment on it that what has happened has happened. This is an appeal on behalf of the Christian body, even though I don’t belong to CAN, PFN or any other association. The prosecution should please bear with him; let’s leave everything to God. Nobody prays that such a thing should happen, but we pray that God grant the lost souls’ peace. The fact remains that it is not the Man of God’s fault. He does a lot of spiritual things like praying for, and delivering people. The incident might be more spiritual than physical or ordinary like people think it is. We just appeal to the Lagos State government to please let’s forget it. They should allow him go back because he is spending a lot of money to build that place; they should consider that. I know that the incident is beyond ordinary, and this is the time for pastors to come together and support him.”

TB Joshua’s criminal case was fueled by some highly influential South Africans whose family member died inside the building that collapsed at SCOAN.

Experts at TB Joshua has released contradictory evidences that couldn’t support their claim.

The prophet shot himself in the leg when he admitted to a judge last week that he cut corners with the construction of the ill fated building.